Bugsy is a little flat coated retriever mix who came into rescue on 5/20/14 at the tender age of 5 months. He has been picked up as a stray and had been at the shelter in isolation for a month before we could take him as a rescue exit. 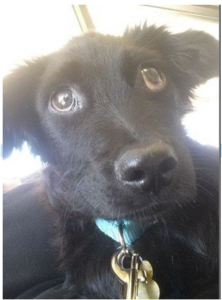 Bugsy suffers  from bilateral buphthalmos, a congenital ocular disease. There is no lens in his left eye and the lens in his right eye is pushed way back so eventually Bugsy will be blind.
Upon physical examination it was also determined that he had been constantly crated in small confines for a very long time as the muscles in his legs did not develop properly causing him to waddle like a duck. Good thing he loves the water!

Bugsy has been under the care of Dr. Ashton of California Veterinary Specialists in Murrieta since intake, going in for testing every one to two months. Initially he was treated with four different kinds of drops/ointment for his eyes. He adores Dr. Ashton and gets so excited when he realizes he is going to see her.

He now lives with a foster family that has a little lab mix named Fauna. As Bugsy’s sight is fading he has started to rely on Fauna for guidance and comfort. The two have become best friends, quickly bonded and now Bugsy depends on her when he is feeling scared or uncertain. They are inseparable. He started getting plenty of exercise swimming and those muscles in his legs have gotten stronger. You can hardly tell there was ever an issue with his legs unless he is very tired.

Bugsy had his right eye removed. Bugsy’s foster mom says “Bugsy is doing better since his eye surgery. I know he is feeling better with a lot of that pressure gone. He still has his bad days when no other dogs can be near him. We love him though and will work through the tough days.”  Trying to keep his other eye as long as possible, Dr. Ashton has now prescribed him new medication. Bugsy is so fortunate to have landed in such loving care.

If you would like to sponsor Bugsy, please select the yellow DONATE NOW button on the menu bar, upper right on this page. Donations from generous supporters like you support our Save-a-Life Permanent Foster Program.