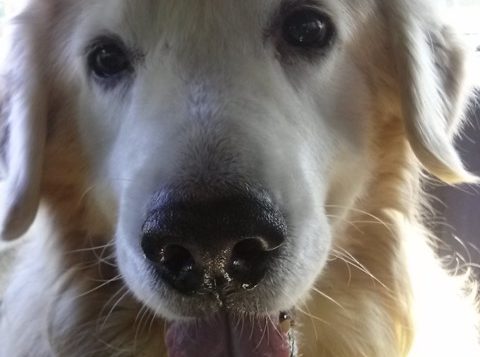 Achiu *Always in our hearts

Throughout our lives we are constantly saying hellos and goodbyes. We also greet the fur family members we instinctively know will be in our lives forever. Life is an unbroken cycle of birth and passing. I have had to kiss someone goodbye that I knew I would outlive but someone I would rather take my place any day. My Golden Retriever, Achiu aka “Chi or Puppy Chi”. He was named in Taiwan and carried on his spunk and charisma for 15 or 16 years. The sound of his claws on the wood floor became an adorable tap dance routine that was in sync with my every move. He understood what I couldn’t and somehow took on the role of a best friend. He was a perfect dog with an enormous amount of love and loyalty to his entire family

The other day I gave him the great gift of being put to sleep before his kidney failure got worse and could cause him another single second of undeserved pain.

It comforts me to know that his time was blessed with things that loving dogs should have i.e. tons of treats, unconditional love & a loving family who would do anything for him, car rides with his face hanging out the window & hair blowing in the wind, camping trips in S. Lake Tahoe, trips in the RV, and just drives around town.

It’s so difficult to walk through the door at home knowing his smiling face & wagging tail won’t greet me at the door but I sense that he’s still here even though not physically; just his memory. His beautiful, gentle, kind, caring, loving, selfless, perfect spirit was evident to every human who knew him and I am beyond lucky have been a part of his life. But for all that he was given, he returned so much more. Achiu was the one friend that I could count on when I felt that I had no other friends. All he wanted in return was nothing more than a pat on the head and lots of love to include hugs &; kisses on his soft, silky face.

The loss of a pet is a horrible feeling that carries a heavy burden of grief. Tissues have become a daily necessity but I’m hoping that the good memories, that I so deeply cherish, will eventually start to take over for all the wounds of pain and suffering the loss has left in my heart. I’ve gone through a gamut of good and bad emotions, feelings of gratefulness for what he brought to my life and extreme, intense bereavement in his passing.

As his health issues progressed, my knees and chest served as the resting place for the head of my sweet, tired baby. I asked him to tell me what I should do for him &; he looked into my eyes and right then I knew what he was saying. He was telling me that he wanted to go home so I stayed up all night &; laid with him on the floor every second of his last day. I was very blessed to be able to do that & I wouldn’t change that time in for the world.
I love & miss my boy more than anyone will ever know. He brought me such joy and love that he is so deserving of whatever paradise awaits him in Heaven, just on the other side of the Rainbow Bridge.