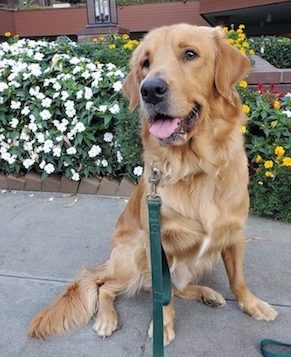 Anderson was an owner surrender in September because he snapped at his prior family’s young son.  We feel this was due to major changes in that household’s dynamics that added stressors and new extended family members with their dog moving in to that home.  Anderson is a Golden that should be slowly introduced to new things once he settles into his new home.

Anderson is a Velcro Golden Retriever that doesn’t want to leave your side or feet. He is exceptionally loyal and loving and let’s not forget – very handsome.   We feel that Anderson would be happiest in a quieter home with not too many changes or lots of people coming in and out, and if there is another dog, one that is respectful of him.  He does love playing with other dogs whether it is tug of war or rough housing.   That said, Anderson loves to greet new dogs on walks and playtime at the dog park. We think he needs an active family where he will receive daily exercise and daily walks as Anderson is 1-1/2 yrs old and craves activity versus just laying about the house – which he is pretty good at as well if the situation calls for it.   Ideally, he’ll have a yard and outdoor space where he can burn off some of his energy, but he would do equally fine in a condo/apartment if his owner is dedicated to his exercise.

He loves bully sticks and treats like chicken and other “high value” treats and dry treats such as a biscuit are  not his favorite.   High value treats with a strong aroma are important when training.

Anderson has been a great all around Golden during his 5+ weeks with his foster care.  He’s grown very attached to his foster dad with whom he has bonded closely.   We also think Anderson tends to connect more with men more than women though, but he can be a lady’s man too.   When he gets connected to his caretaker, he doesn’t want to loose sight of them.   We have found that he can be left alone up to four hours without any problems but he probably won’t thrive in a home where he is left alone all day.  He has great house manners, is housetrained, and has not been destructive in the foster’s home.  Since he is young, he might occasionally get a hold of a small clothing items if laying around, sniff around in a waste basket and or steal a sock or shoe but this has not been a major problem in foster as he’s generally respectful.   He does not need to be crated nor do we recommend him being crated at his new home.   Anderson knows a few commands such as sit, down, come, but he definitely needs an adopter who will work with him on future training every week in some manner.

Anderson sometimes prefers to hunker down in a safe area beneath a desk, or in a corner between a wall and another object and this becomes his safe zone – especially if he is anxious. His foster has been working with him to not become reliant on those “safe” spaces and Anderson is quickly adapting.    Sometimes he does not like to be bothered when he is resting in this safe zone by somebody other than his master(s).    Our behavioralist is recommending that his adopter work on getting him more confident and out in the open and standing up if he does this rather than him laying down .

He enjoys being close to his human at home and is more social than independent.  Our behavioralist thought he would do well with another dog but if there is another dog that dog should be calm and well mannered. As mentioned he also does well with dogs he meets on the street or dog parks and has done great with dogs he’s stayed with at their home.    Anderson does love to play tug of war, catch and was a swimmer at his prior home.  A home with no cats is recommended.

To summarize what we’re looking for:

In return for all this you will have a very handsome affectionate Golden that loves you unconditionally.

If you have already had your home visit by a SCGRRescue volunteer and believe your home would be a match send an email telling us why you’d be the perfect home for Anderson at: SCGRRescueAdoption@gmail.com