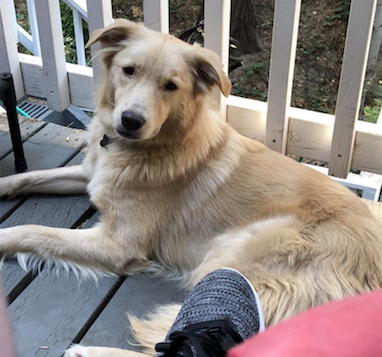 Andromeda (aka Cassidy) is a 2 year old Golden Retriever/Australian Shepard mix. She has a beautiful, cream colored coat. Her ears have a perky flop and weighs about 45 pounds and will probably be about 50 lbs. by age 2. She was adopted by a family and was doing well but was in a rather busy household with children in and out and she displayed some fears when things became a bit too chaotic.

She is protective of the home and had two incidents with nipping (from behind) causing no injury the first time and she nipped a person outside the front door when one of the children opened the door and she went out nipped this stranger on the buttocks resulting in a superficial small puncture wound. The family have regular visitors with their kids and she seemed to get anxious with high activity in the home so the owners decided to return her to rescue.

She was placed with a veteran foster with three dogs and has done well with no incidents. She found her place within the pack. A behavior evaluation was arranged and it was reported Cassidy is a real sweetheart. She didn’t notice any aggression in her and she even tried to startle her by dropping something and got no reaction or fear response and felt the busy home where she was made her too anxious. She is not overly energetic and will play. Her foster reports she fit in easily with Josie (black lab and matriarch of the pack) and the other small golden mixes. She was trying to find where she stood with the pack, Linus was not an issue but she gave Lainey Loo a run for her money in wrestling! They have a blast!

Josie, the comfort dog, completely ignored Cassidy initially, still claiming her position as Top Dog and every foster dog just loves Josie. Cassidy would do well with other dogs, or as an only dog and in a quieter home and needs a quieter home with low key ‘parents’, maybe semi-retired, or mostly at home (even after COVID!) She loves being around her family. She was much too interested in the cats so would not recommend placing her in a home with cats. Cassidy crates beautifully, both in the daytime and at night. She sleeps quietly all night. She did cry when first left, but a great thing is to play the Alexa “Calm My Dog” App which calms all the dogs. She resisted the crate the first night, but then realized that all her friends were already in their crates and willingly got in and no issues since.

She rides in the car well and loves going on adventures with the whole gang and gets very excited when you pick up her leash, even if you are just putting it away. She eats well and slowly and hoped to maybe get some of the other pups leftovers but no such luck. She’s had obedience training in the past and responds to some standard commands such as sit and down. ‘Come’ is a little more on her terms though she eagerly comes to a whistle and her name when calling her in from outside. She doesn’t pull much on the leash.

You must have your application and home interview completed before you would qualify to adopt. If you have those requirements, please email bestgoldens1@gmail.com of your interest and what type of home you can provide this sweet girl.