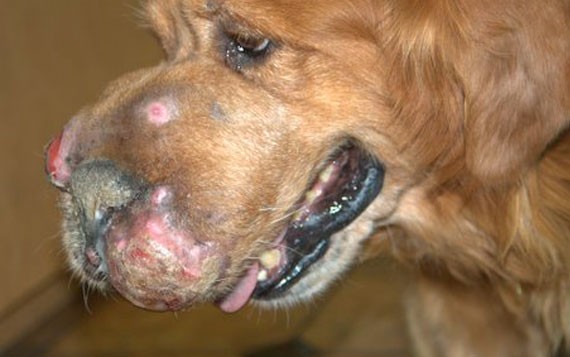 Baby Lou • Always in our hearts

On October 27, 2011, SCGRR took into rescue “Baby Lou”. He was one of the worst cases of animal neglect/abuse/illness we have ever seen. Baby Lou had Fibrous Sarcoma. His was an aberrant variant that was considered on the scale to be benign even though it was malignant. It was literally eating away his face. Sadly, there was nothing that could be done for him. If it were on any other part of his body, it could have been cut out and his chances for survival would be about 95%. If his owners had taken Lou to a doctor when this first appeared, it most likely would have been successfully treated.
Lou was able to spend a week in a loving foster home. Being spoiled and every need met. His foster mom cooks salmon and home made pizza. Stays up with him at night since his breathing is so labored, he cannot find a peaceful place to lay down. Nights are hardest for Baby Lou. His face is literally being eaten away. However, his attitude, his love, his gratefulness is something we have all learned from. This gentle, beautiful life that has been so neglected, so abused teaches us gratitude.
Less then a week after going to foster care, the very painful decision was made to say goodbye to our sweet Baby Lou. Surrounded by love and cradled in our arms he simply laid down and finally, peacefully, enjoyed the sleep that had for so long evaded him.
Baby Lou touched so many hearts all over the world. This gentle sweet boy’s only crime was to wind up being a companion in a home that could not properly care for him. He brought with him a message of love that truly was able to transcend beyond himself, and bring us together for a common cause. That was his gift to us. And all of us are the better for having known him. We thank all of you that helped with his medical care and please, please know that all of your suggestions were taken to heart and where possible, explored.
BABY LOU EPILOGUE Sue Mollica and Bobby Greco of N. J., we so touched this Baby Lou, they wanted to make sure that Baby Lou had something in death that he did not have in life – a last name. So they adopted him. Now Baby Lou will wait with the others for his family at the bridge.