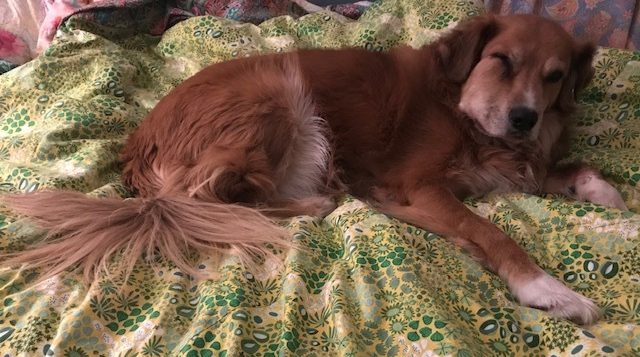 Last week (7/14/2020) my permanent foster Bandito, crossed the Rainbow Bridge. Bandit moved in with me and Cosmo (my senior golden) in December 2019.

Cosmo and I had a meet and greet at a park in the valley with his current fosters and it was as if Bandit and Cosmo already knew each other. For those who don’t know, Bandit had an (inoperable) tumor in his mouth. I took him to my vet who concurred that the tumor might get angry if we tried to remove it and the cancer may have already spread at this point. She figured 1-3 months. Bandit lived with me for 7 months!

He slept on the human bed, and on the various dog beds in my home. Bandit was a little bit bossy, he’d wake me up when he was ready to have his breakfast (usually at 5:30 am). He loved going for walks, had this excited bark when we got started down the street. When we were home, he had a melodic howl whenever he heard a siren.

About a month ago Bandit started to have seizures which were caused by his large tumor lasting three minute.  The seizures became more frequent and more severe each time. A week ago he had two seizures in a short period of time, and after the last one he was not able to walk.

I have the best vet and vet techs in the whole world and they were able to help Bandit cross over the rainbow bridge with love, care and peace.

It was hard to say goodbye to Bandit, however I’d do it all over again in a heartbeat.

Bandito is an eight year old golden mix that was surrendered to SCGRR twice by the same family.  Bandito had large a cancerous mass on his cheek when he was first surrendered.   With treatment, the mass decreased in size considerably.  With the intent on becoming a permanent foster as we knew we could not get margins on his mass removal, the original owner begged the rescue for his return so we returned him he to his owner after a month.

Five months later, the mass had come back with a vengeance and rather than keep him through this phase of care,  he was surrendered again; this time for good.

His foster mom says  Bandito loves to steal baguettes when she brings them home from the grocery store but was reminded that stealing delicious food is what bandits do. Bandito also howls howling   along with sirens of fire trucks or police cars.

Bandito is still doing great and is a happy, active boy with a strong appetite and is loved very much by his foster family.