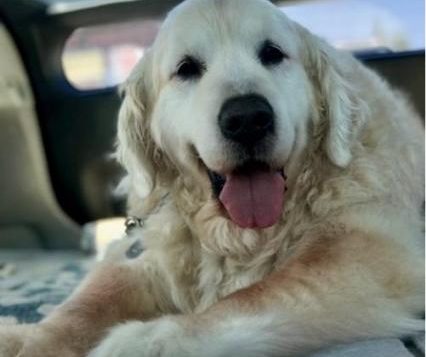 Hello to all at SCGRR,

We adopted Bart (Bartholomew ) from your rescue on May 16, 2015.  At the time Bart was just a few months shy of his 8th birthday and about 30 lbs. overweight.  We fell in love with his picture on your website and after waiting 2 years since our Golden, Buddy had passed over the bridge, we knew he was the one for our family.

I have had 8 dogs in my lifetime and can honestly say there was none like Bart.  He was a magnificent dog in both body and soul who brought so much love and joy to so many.  He in turn had a great second act in life.  What 8 year-old dog, overweight and can barely walk, gets adopted, finds purpose as a therapy dog and is so loved by all he meets. (By the way, with the help of our vet he was down from 124lbs. to 91 pounds).  Until COVID took over our lives, Bart came to work with me every Tuesday and Thursday at the Motion Picture Home and was based in one of the nursing department offices. He was well known on the site, walking the halls, leash in mouth, visiting residents, offices and attending various staff meetings.  The outpour of emails from colleagues hearing of his passing is a testament to how he touched people.  As one colleague wrote in an email after hearing of Bart’s passing, “He made a deep impact on everyone who he came into contact with – he effused empathy and calm.  So many here will be touched by this news and feel so sad.”

Bart was truly a special dog and we are so thankful to have been chosen as his forever home for the second half of his life.  Although only 5 years, they were so joyous.  Attached is one of the last pictures taken of Bart.  It was hard for him to walk at the end, so we would take him on car rides which he enjoyed.  The picture was taken after one of our rides.