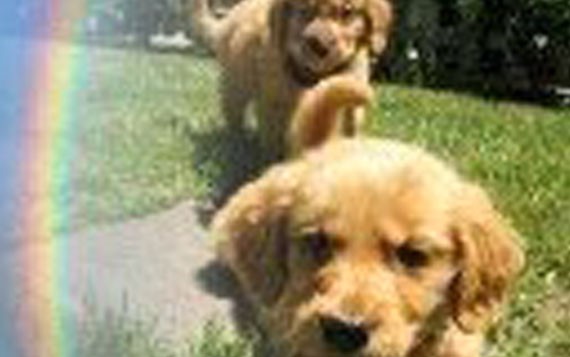 Ben and Jerry • Always in our hearts

At the tender age of 4 weeks, Ben and Jerry were dumped on the doorstep of the Downey Shelter in deplorable condition. Jerry had Puppy Strangles….his lymph nodes were swollen and his skin had sores. Ben came to us unable to walk…he was so weak that he would fall over onto his face and could not stand back up. Through the constant care, feeding, attention, and loving showered on them by their foster parents, Michelle and Sangtar, they seemed to be making full recoveries. But this week, they both took a turn for the worse. As our president announced: “Neither Ben nor Jerry were able to win their battle with distemper. Our valiant puppies crossed the Rainbow Bridge today where they will have healthy bodies, happy lives and constant love. We will never forget those wonderful faces. We weep today for all those who tried so hard and lovingly to see them through their many set backs and we rest assured that every thing possible was done for them.”

With Angels They Play

They haven’t really been taken away.
They have only gone with the Angels to play.
They have been given wings with which to fly.
All their troubles have passed them by.

Their life in heaven now must start.
But we’ll hold their memory in our hearts.
Nothing about them will be forgotten.
But now they sleep on billowy clouds of cotton.