Our beautiful Blanca passed on Tuesday, 9/22. Her cancer was just to far gone. She was the sweetest most loving golden we have In our home and we have had a lot. She will be missed and always remembered with love. 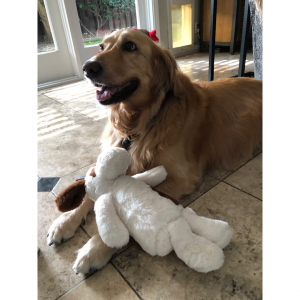 Apparently this took some convincing but a kind-hearted Angel was able to convince extended family to take their golden to the vet at her expense.  They had inherited Blanca when her owner passed and were unable to care for her basic needs.  Forgive the graphic nature of this photograph, but how could anyone let a dog suffer like this? 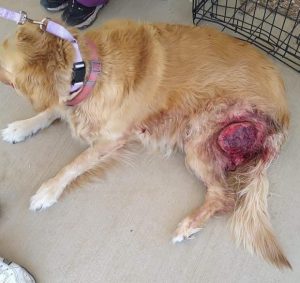 Once diagnosed, the family declined further care and had decided to leave her in this state until she passed.  Enter this Angel one more time who refused to let that happen. She remembered SCGRR at the jamboree last year and contacted us.

Eight year-old Blanca has a presumed grade 3 mast cell tumor, with a guarded prognosis.  Now MCT’s do not start this large. This is a classic case of neglect and it will cost her life. 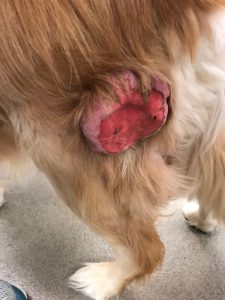 Still as sweet as can be, she was suffering. Our options were euthanasia or to try a new cancer drug from Europe, Masivet which cost us $700/month, to help decrease the size for an attempt to surgically remove the tumor with some sort of margins. Of course we were going to give her a shot for as many months as we can.

Blanca has been at the vet for three weeks now. High dosages of steroids and chemo have resulted in clearing the open wound and have shrunken the mass somewhat, but it appears that only amputation would result in clean margins.  Even though her chest and abdominal x-rays were clear, these types of aggressive tumors have a high likelihood of metastasis to regional lymph nodes, liver, spleen and bone marrow, in addition to likelihood of local recurrence, hence the removal of the limb. 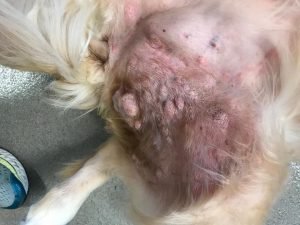 The best way to know if it has metastasized and where, is to ideally do a CT scan which cost approximately $1500.  There are less inexpensive options, but they will not give us the full picture and time is of the essence and her treatment depends on this full picture.

If the cancer has metastasized we would possibly be looking at chemo or radiation if we are in time – and this is where our vet is worried – but we won’t know until we see the results of the scan.

Blanca has responded to treatment and is dong quite well.