Permanent Foster Byron crossed the Rainbow Bridge on 8/27/2020 just three years after arriving  to rescue. He was deeply loved by his foster family and all who met him.

From his Foster mom:

When our dear Maltese Oliver died I decided to only foster because I didn’t want to go through another painful loss of a beloved dog.

Fast forward to August 10, 2017 we took in our 27th foster. The Southern California Golden Retriever Rescue (SCGRR) said his “human” family turned him in at the Palmdale (high kill) shelter at 12 years old without giving his name.  The SCGR rescue named him Byron.

The first thing we observed about Byron was that he hated that name and when i called him Byron he would give an annoyed look…’I Am Not An Old Man, don’t call me Byron’. I would joke that one day we will say some random name and he will perk up. I call my loved ones sweetie and he took to that name and adopted it as his own.

On August 17, Sweetie had 5 golf ball sized tumors removed. When I came to pick him up after surgery he looked so abandoned and wouldn’t look at me.  The vet estimated he had 2 weeks to a month to live.  SCGRR asked us if we would be his forever foster, exactly what I wanted to avoid…when we make plans G-d laughs. I remember thinking don’t get too attached but that was impossible, he was pure love. Sweetie, loved hanging out with Emily and her friends, hanging with his furry friends and walking to the beach even when I wanted to do a quick walk.

When we first got Sweetie I wondered why SCGRR would rescue such an old dog.  I get it now, he finally got the love and life that he deserved at 12 years old and he had 3 fabulous years and as sad as I am right now I wouldn’t have done anything different. I said to a friend 3 years ago, we will get to be a blessing to him for the rest of his life.  I love you Sweetie and thank you for being a blessing to us for the rest of your life.

Byron came to our rescue via the shelter in August 2017. At the age of 12 years,  he waited 11 days for his family to come claim him. They never showed.

SCGRR was contacted and went to evaluate him. This poor soul had infections in both ears, his skin was a mess, and had a large mass on both his front and hind legs.  He is just the sweetest senior and despite his discomfort, his tail never stopped moving (even though part of it is missing). 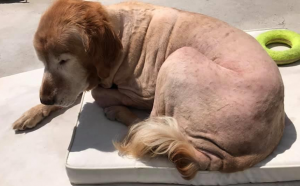 We took him to our vet for a thorough exam and a much needed spa treatment.  Fine needle aspiration of the masses on his legs determined that Byron has Mast Cell Tumors, but fortunately, low grade. The tumors were removed with clear margins and although he has recovered nicely, his skin still continues to be an issue.

Byron was placed in in our Permanent Foster Program not only because of his history with MCT’s; his age and allergies played a lot into the decision. It is a delicate balance to keep them under control. Byron gets weekly medicated baths to control his skin allergies.

Byron is a very happy boy. He loves to go for walks, play with toys, and the company of people and other dogs.  Quintessential golden? Yes! A whole lot of golden love.