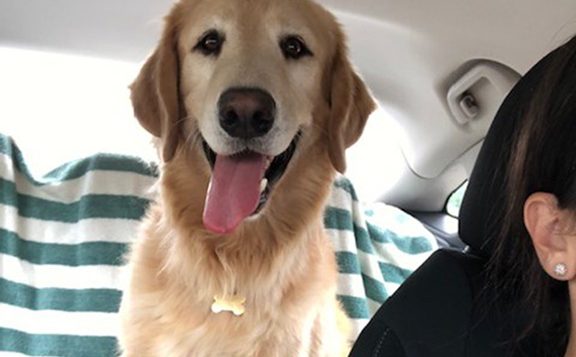 Meet Calum, another sweet dog we were alerted to by our rescuer in TJ. Found wandering the streets, skinny, matted and very sorry looking, almost hit by quite a few cars, she scooped him up and got him to our foster down there. After a few weeks in foster here, he is ready to find his new home.
Despite being born on the wrong side of the border (through no fault of his own, poor guy) Calum is your typical loving, affectionate, velcro golden retriever. Totally starved for attention, he has not left his foster mom’s side and is her constant companion. He thrives on affection, and loves getting pets and is a great cuddle when he wants to be. He is also a quick study, and has already learned a few basic commands, like sit, stay down, and paw. He does still need work on his leash manners- we don’t believe he has been on too many walks and he tends to veer back and forth in front of his foster mom. He has not been left alone much during this period due current circumstances, but he has not been at all destructive when left. He loves riding in the car, and will jump right in to the backseat, where he enjoys both the ride and the anticipation of the eventual destination. He is not very into toys, bones, or fetching balls, and while not very food motivated, he does like the occasional treat, which does help in training. The one thing he is into, and gets pretty excited about, is any light source, like a laser pointer or a flashlight, or refection from a watch or phone-he will work himself in to quite the frenzy chasing it.
Calum is very calm and chill, and has been very friendly with kids he has met. He is generally well behaved around other dogs, and is great off leash with his foster parents, mostly staying by their side, but enjoying exploring the area, and always coming quickly when called. He is uber affectionate and loving, but can be independant and reserved at other times. He may suffer some abandonment issues though, as his foster mom needs to stand near him when he’s eating for him to eat comfortably, almost like he needs to know he is safe and she will not leave him. Not uncommon in dogs that have not had much in life, and hopefully he will no longer feel the need to do so once he knows he is finally home, wherever that might turn out to be.
https://youtu.be/y97Co1JVgi8
https://youtu.be/NftWGfGKMRA
If you have already completed the application process, which includes BOTH the on line applications as well as the in home interview, and you would like to be considered as a potential home and family for sweet Calum, please contact his rep at bodie99@cox.net
At approximately 5 years of age, the minimum adoption donation for Calum is $500.
Calum’s  ID# 5346