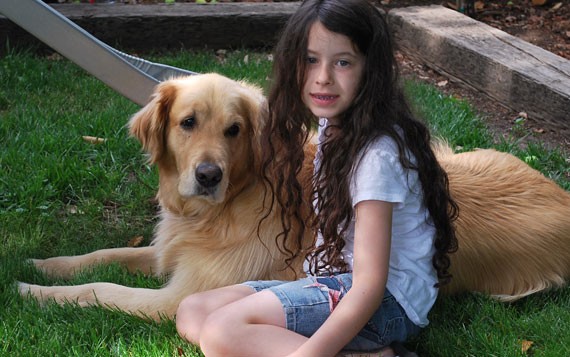 Chase • Always in our hearts

When we finally decided to get a new golden friend, we luckily found one that sounded so good… 100 miles away. A crazy night drive in the dark, with no GPS in unfamiliar territory, arriving home at 2:00 AM we wondered for a second if it was worth all that. Well, of course it was. We now had Chase aka Woogie aka Boogie aka Big Doggie. After Chase got over moping in the back yard all night and most of a day, he finally decided to check out the house. His foster said in his last home he was always outside, away from people. For a long time he did not want to go outside even to take care of personal needs, probably afraid of being left out there again. Eventually he learned that he got to come back inside!

Inside was nice. There were people, and two kiddos who quickly became very attached to him. He was sweet, well behaved and gentle. He put up with all kinds of kid stuff without complaining, including being decorated by a girl…many times.
Being a very big guy, and terribly out of shape, going out for a walk was a challenge. Over time Chase was getting better at walking and seemed to enjoy the opportunity. He would come when he heard the leash and obligatory plastic bag being picked up. Sometimes he got to go and pick up one of the kiddos from school and the teacher loved Chase too. Some of the other kids were afraid, but he was so gentle they became more comfortable petting him. Everyone who met Chase loved him, how sweet he was, and that sweet stuffed animal look he had, even at over 100 pounds.

Chase’s favorite things were to be with people, catch balls thrown at him (never bothering to actually chase them as a Golden should!), of course eat and follow his new mommy everywhere. If petting stopped, he would offer up a paw to be held. When that paw was let go, the other one instantly appeared. He was a precious boy that was a wonderful fit at his new home. After about four months with Chase, one morning he was let outside to do morning business and when the door was opened to let him back in, he had crossed over the rainbow bridge. Chase will be terribly missed.