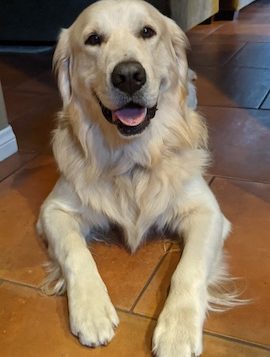 This handsome guy is Cormack or as we call him, Sonny! He’s an extremely happy, energetic youngster that was unfortunately left to himself in his backyard most of his life. But he’s now got a whole new world to explore and making the most of it.
When he arrived at his fosters’ house he was ready to dart back out the door and only wanted to be outside. It took a couple of hours to get him to come in and check out the house. Since he was left outside most of the time in his previous home, he only felt comfortable within the gates of his foster homes’ backyard. It wasn’t until day 3 that they were able to get him outside of the gates to just sit in the front yard. He was also not comfortable being in a car and panted the entire time. Fortunately, he’s come a long way since then! Now he loves everyone he meets and is always up for a quick kiss (slobber).
Cormack now goes to one of several parks (via a car ride) on a daily basis and has had a chance to meet & greet other dogs of all sizes and temperaments. (We don’t think he had exposure to dogs in his previous home) He loves to initiate play and chase and because he’s only 3, has a lot of energy. He even has a favorite doggie girlfriend that lives across the street and they get together for walks and play dates. He knows some basic commands like sit, stay, come and is still working on walking properly with a leash. He is strong and can pull you like a sled so consistent leash training is a must! His overall education needs to be continued so he can feel even more comfortable in his surroundings. We also think that having another well-adjusted dog in his new home will help him with those needs.
Cormack’s favorite things are playing ball, chewing on bully sticks, ripping up stuffed animals, playing with his girlfriend Rosie and snuggling in your bed. He loves to jump on the bed in the morning and snuggle, so just a warning that this activity might delay any morning appointments because he’s so soft, warm and cuddly. He will also be glad to sleep on your bed for a bit (until he gets hot), if invited.
Because Cormack did not have much/any structure in his previous home, he’s still learning. He will follow you everywhere and he’ll jump up to get your attention. He also wants to walk in front of you and will mouth your arm/hand to get attention. We believe that he’s just afraid of being alone and wants to make sure you don’t get away from him. While his jumping is gentle he can also be mouthy so he needs to continue to be assured that nobody is leaving him and to ensure that both habits are continually monitored and corrected. If you can provide him with a toy/ball that will ease the mouthiness. He’s fully potty trained but did have a couple of “marking” incidents when he first arrived. He’s been neutered since then so hopefully his marking days are over.
One thing he is not,…is a barker. He only barks when he wants to play. Doorbell – nope; coyotes yelping – nope; gardener outside – nope; come play ball with me – YEP!!! So, he is not going to be good at protecting your home, but if someone does get in, he might lick them into submission.
Because Cormack has a rather long body, he is able to put his paws on your counter to see if there’s anything worth stealing. So far he has only been an innocent observer of the collection on the counter, however I would not leave a piece of chicken within reach; it might not be there long. He started out being a picky eater, but the more exercise he gets, the less picky he is. (shocking, huh)
Cormack has a great desire to play, play, play! A big yard to run and chase balls is on his wish-list. And since he has a lot of energy, it would be desirable for his new home to have another medium to large-size, well-adjusted dog to play with and keep him company; he hates to be alone. Cormack still acts like a puppy so no grumpy dogs or he will drive them crazy. He would also do well with kids ages 10+yrs to throw balls and give him lots of loves. We are asking for no younger than 10 yrs as he is big, still jumps, mouthy and could knock over a smaller child. No experience with cats, but he would probably be okay.
Cormack is a wonderful dog that deserves a great new home with people that can love on him, continue his training and to show him their world. And since he hates to be alone and demands attention, it would be better if his new family was able to be with him most of the time. If you think you can give Cormack the wonderful home he is craving, please contact Cormack’s rep at lynneluvsgoldens@gmail.com and tell her how this handsome guy will fit into your lifestyle. You must have both an Adoption Application submitted and an In-Home-Interview completed by a SCGRRescue.com volunteer to be considered as a potential adopter.
At 3 years old, the minimum adoption donation for Cormack is $500