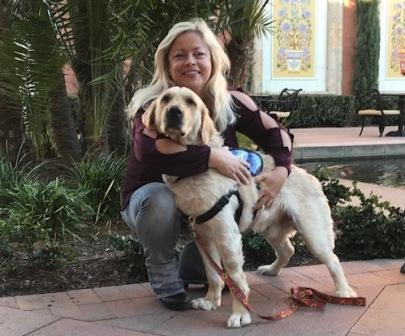 Drago came from the meat rescues in northern China, arriving at LAX on Feb 13. It was hard to believe he was 2 years young.  He looked ancient:  droopy eyes, baggy skin, lumps all over his back.  He headed home with his foster mom for some much needed TLC and spoiling. He still bears the scars of his past – obviously some trauma to his head with some eye damage and scar tissue in his gums on one side.  He hacks like a smoker when he pulls. His thin body doesn’t quite match his enormous feet. He loves to hold your wrist in his mouth a little too hard when he gets excited.  He makes piles of stuffed toys and sleeps with them.  And if you hug him…he gets in real close, lays his cheek against your face and gives very gentle kisses.  His gratitude is immense.

Drago will remain a part of the SCGRR family, adopted by his foster mom and will have the best life ever. He has already started on his bucket list sooner rather than later to make up for his unthinkable past.