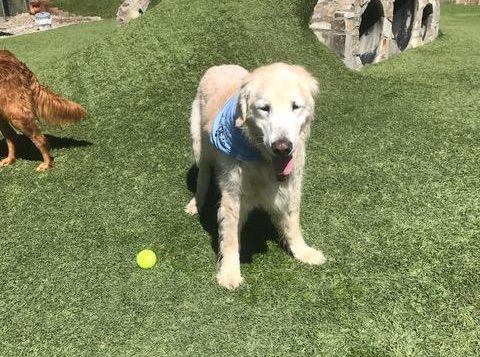 It is with great sadness that I report that Finnegan crossed the Rainbow Bridge yesterday, September 30, 2018. Next week, he would have been with us 3 years. This picture is of Finnegan at the 2018 SCRRescue Water Park Event in September. He had such a great time.

Finnegan came into rescue October 9, 2015. Age estimated somewhere between 12 and 14 years old, he had a terrible skin infection which we have treated, and now like most ‘skin’ dogs, he requires medicated baths regularly.

Finn’s ears were also horrific when he arrived in rescue and continue to be a battle even with specialist care from Veterinary Specialty Hospital, one of the best Animal Hospitals in San Diego. Finn’s original diagnosis in October was bilateral ruptured tympanic membranes, secondary otitis media. The culture revealed abundant rods in his left ear, but in his right: E.Coli, Staph, pseudintermedius (methicillin-resistant), corynebacterium, pseudotuberculosis, enterococcus. Simply….a mess! Over time the infection in his left ear resolved. Twice Veterinary Specialty Hospital formulated specific medication to target the bacteria in his right ear, and each time some improvement was noted but his right ear was still not clear has he approached a year’s time with his foster family.

His foster family provides diligent care and medical treatment. Medicated baths, initially twice a week, reduced to once every two weeks; treatment of his ears, constant cleaning, different medications in each ear, careful not to cross-contaminate. He continues to improve but we know it will be a long road.

He is almost completely deaf and relies on his foster sibling, Sunny for many things. He has received k-laser treatments which have helped the healing process. Finn has also suffered from conjunctivitis, most likely because the ears/eyes/sinuses are connected.

Ever optimistic, we felt that once we received the ‘all clear’, Finn would be eligible for adoption but as he approached his 1 year anniversary in foster case we felt it would not be fair to move him.   He had bonded deeply with his foster family and resident golden.  Plus… we could not expect any family to continue the level of care required to keep him at his current level of health.

His initial condition is attributed to severe neglect, allergies being the primary cause. Finn will never have to worry about that again.  We are hopeful that eventually his ears will clear.

In the loving care of his foster family he will spend the rest of his days being spoiled rotten…attending concerts at local wineries, shopping at local nurseries, a hometown favorite at Home Depot…the list goes on!