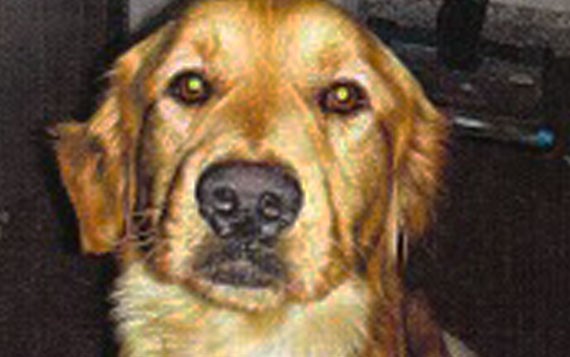 Gideon Brown • Always in our hearts

On January 13, 2009, Gideon, a small, very underweight one-year old, was rescued from the Lake Elsinore Animal Friends shelter by one of our volunteers, Melanie Bruski. Gideon appeared to have a bad case of kennel cough but Melanie took him to her home anyway to start him on the road to recovery. He was a very sweet boy, she said; he listened well and was gentle and calm. When it was time for Melanie to take him to our boarding facility a few days later, she asked to foster and rep him instead. By the 18th, Melanie felt he needed to see a vet as his “Kennel cough” was the worst she’d ever seen, with projectile sneezing, constant coughing, and lack of appetite, even though he was about 15 lbs underweight. The next day Melanie took him to the vet. His diaphragm was completely torn in two and his liver and his stomach were in his chest cavity. If surgery wasn’t done immediately, he had about 2 days to live. Her vet brought in a specialist to do the surgery that very afternoon, with Gideon having a 50/50 chance of making it. They found that Gideon had lung lobe torsion in all 4 lung lobes. That means they were twisted in on themselves and he couldn’t breathe. The surgeon found Gideon’s lungs so compromised that nothing could be done and Gideon was gently released to join his many friends over the bridge. The autopsy revealed extensive scarring of his lungs due to a long-term infection.

Melanie was by his side and will keep his ashes. For seven days, Gideon had a home full of love and care…most likely the best days of his short life, thanks to a very caring volunteer. Now he no longer is in pain, can run with the fleetest, jump with the most agile, and…best of all…not hurt. Farewell Sweet Gideon, you are back with the angels but still loved.