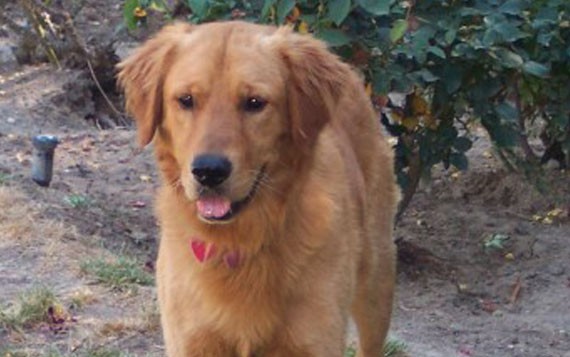 Ginger Torres • Always in our hearts

I lost my Ginger on October 30th, 2008 to an illness that we could not determine. Ginger came into my life by chance in November of 2002. I was new to Rescue and was asked to visit a family who was relinquishing their golden retriever because she was too wild for their lifestyle. What I found was this wonderful and beautiful 1-year old girl who had had some training, but because she had not been housetrained she was kept in a dog run for most of the day. When they let her out of her run, she ran and jumped because she was so happy to be out of her dog run. But I could see that she just wanted some attention and affection, and someone who could be patient with her as she learned her way and grew out of puppyhood.

Before arriving, I had expected to take her into rescue, foster her, and then adopt her out to someone, but I absolutely fell in love with her and decided to keep her to join my family of two Goldens, Fred and Sami. They accepted her immediately and she became part of our family. There were some of the typical rough patches with housetraining and some chewing, but those worked themselves out as she learned from the other two how to live in the house. Also, with all the attention she was getting, she settled into the most wonderful girl, and the training she had received previously started to show itself.

Ginger also became the Home Check girl for my work with the rescue. She would accompany me on home checks and she would walk around the yard and the house checking everything out. More than a few times, I was asked by the families that we home checked if they could adopt her. I was so proud of her!

Our family will miss Ginger tremendously. She was my first rescue dog, and was one the main reasons that I became involved in Rescue more deeply. She was with us only a total of 7 years, but I know that she is now in a better place free of the illness that took her. –Vince Torres