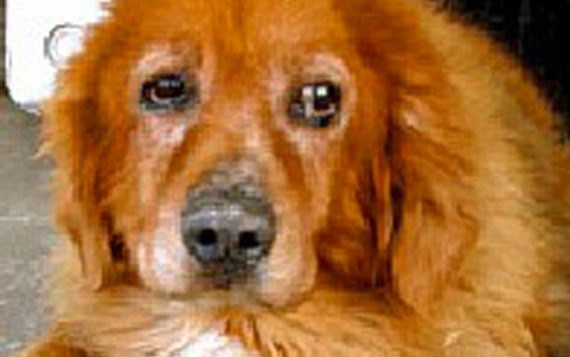 Henry • Always in our hearts

On October 27th, we lost a rescue. His name was Henry, he was 14 years old, and he was in rescue for about an hour. Our volunteer, Melanie Bruski, picked him up from LEAF (Lake Elsinore Animal Friends). He was in very bad shape so she took him immediately to the vet where he was diagnosed with Cushing’s Disease (a swelling of the liver and other vital organs).
He also had a fungal infection of the skin, many tumors in his mouth, one on his cheek the size of a tennis ball, and several tumors in and around his abdomen. His ears were completely full or puss and blood. He could barely walk. When the vet palpated his abdomen he screamed…not yelped, not cried, but screamed. He was breathing very heavy, which the vet said is a sign of pain. The vet said his liver especially was very swollen. Melanie asked if he would survive anything (ie. surgery, meds, etc. ) and was told that he would probably not survive anything…his liver was too swollen and he was already too far gone. Melanie made the decision to have him humanely euthanzied. While waiting for the doctors, Henry had a Grand Mal seizure.
It was awful to watch him go thru this. He was given a sedative about a minute after his seizure started and he died while being petted and told he was a good boy. Melanie said, “I have used about a box of tissues so far tonight. I will never forget Sweet Henry and his short time in rescue.
But I know he will be one of the first to welcome me when my time comes.”

For the last hour of his 14 years, Henry was loved.