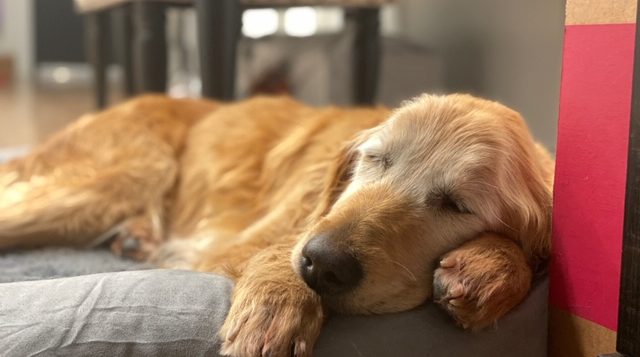 We made the tough call to say goodbye to Kylee on Friday, 5/29.  She was with us such a short time.  We thought the squamous cell carcinoma of the gum was slow moving but she must have come to us at the tail end.  She lost 10% of her body weight in less than a week, her nasal cavity and snout were swelling and sores confirmed as the same cancer appeared and advanced quickly on her muzzle.

After losing her recently regained appetite for burgers, eggs and Hawaiian bread along with a night of more difficulty breathing and more blood in her nose, we decided it was time to let her go.  She never made it to her foster folks wedding this Sunday as their “dog of honor” on the bluffs of Dana Point Harbor.  She crossed in their arms peacefully in her own bed.

Run Free Kylee… or Angel as her foster family fittingly called her.

Kylee  was picked up as a 12 year old stray and taken to the Hesperia shelter. She has horrible teeth, trouble walking and super thin for her size.  Our volunteers rushed to get her to safety and comfort. 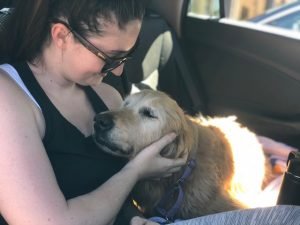 Initial vetting showed horribly rotten teeth – the shelter even plucked a couple loose ones while she was there.  Infection had set in. 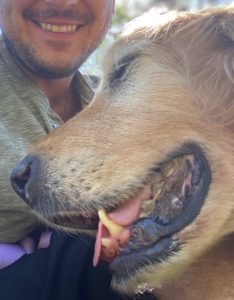 Blood work showed hypercalcemia among other things so further testing  was pursued to check for signs of cancer or other disease.  X-rays and ultrasound showed no visible cancer but she had one smaller kidney and the other looked like it had suffered some trauma.  She was put on a kidney diet immediately and doxycycline to bolster her up as well as help with the mouth infection.  Her parathryoid hormone levels indicate high normal – likely due to the kidney disease which we estimate at stage 2.

On Thursday May 7, she is headed in for much needed dental work including at least two extractions.  We will also do the spay surgery to prevent future infections from pyometra.

In the meantime, she is enjoying soft surfaces, hand feeding, plenty of water, gentle strolls and lot’s of napping with her foster folks.  They even discovered if they took the cushions off the sofa she can get on it and LOVES it.  We will see if her energy improves as she is free of dental pain and with good nutrition.  Next up, renal follow-up in a couple months! 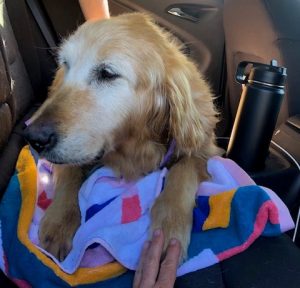 After all that Kylee has been through, the biopsy of her mouth shows Gingival squamous cell carcinoma.  Our vet spoke with an oncologist who said it’s a fairly slow growing cancer in the early stages. She is also in stage 2 – kidney disease.  Her x-rays and abdominal ultrasound are clear, which is a good sign.

Getting rid of 20 rotting teeth has made her much more comfortable, and is eating very well now so we can start to get some weight on her.

Kylee will be the latest addition to our permanent foster program. She is already learning about picnics in the park, puppuccinos, and hopefully will get to the beach as her energy improves.  Spoiled rotten and rightly so.