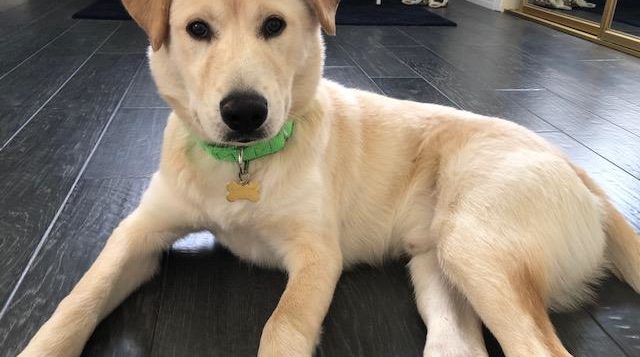 This is Kyon (pronounced Key-on), and he is all puppy! He came to us because his owner was having some health issues that prevented him from being able to keep up with Kyon’s enthusiastic zest for life! He is half Golden Retriever, half Siberian Husky, which means he has plenty of energy to offer an active family! Kyon is a very sweet puppy and loves to be with his people – the classic Golden trait. He is also always ready for play and adventure – Siberian Husky

Kyon came with some training – he knows sit, shake, no, high 5 and sometimes wait. He still needs a bit of house training practice but overall he’s doing well. He has pretty good house manners considering he’s only 6 months old, but he does need a lot of supervision like all puppies do. For these reasons we are looking for a stay at home mom or dad so he doesn’t get into trouble! His leash skills aren’t too bad either – he is very curious and likes to stop and sniff everything, but he doesn’t pull much (training will prevent that in the future).

Kyon loves to play “catch me if you can” when you want something he has. He gets excited over things like leaves flying by, kids playing (he wants to join them but is too big for small children!), and even chasing his own tail! He also gets very excited about meeting other dogs on walks – he is dog friendly but like most puppies he needs to learn social etiquettes about how to greet them! He loves his toys but his curiosity does make it difficult for him to resist shredding them to see what’s inside. Playing with water from the hose is also a favorite pastime

He is definitely a people dog and can be found laying in the middle of the kitchen floor while his foster mom is cooking, he sleeps on his bed right next to her bed (hasn’t attempted to get up on the bed yet but he does like to be on the couch), and follows her everywhere so his forever mom and dad should like having a constant shadow!

Kyon needs a home where there is a lot of activity and people with a lot of energy! Because of his size, and he still has quite a bit of growing to do, we need to place him with older kids who won’t get knocked over. He will require at least a couple daily walks which will need to lengthen in time as he gets older, and a yard to run around in – he’s good at exercising himself between walks by tossing around toys and running after things.

Kyon is in great health but is currently finishing up treatment for Giardia – it is common for puppies to pick up parasites until their immune systems mature. He will need to be retested in a couple weeks to be sure he is free of the Giardia (until he tests negative there is a chance of passing it to other dogs).