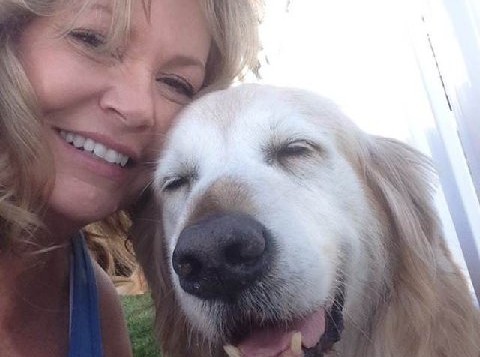 My husband and I adopted Manny at an adoption event in Solano Beach in January of this year. We had found him in the SCGRRescue site and decided to make the 2 hour drive to get him. He was so beautiful and sweet, and exactly what we were hoping for.

Manny was effortless and always just so very good. We realized that adopting a 12 year old dog meant that we may not have him very long. I made a promise to Manny the day we got him and I told him that no matter what, and no matter for how long, I’d take care of him and love him until the end. That was exactly where we found ourselves eight months later.

Manny had a seizure for the first time in July and ever since his seizure he was not the same. Many days he seemed to be fine and back to his old self, yet there were plenty of days where he just didn’t quite seem the same. A month later I came home from work to find Manny in the process of transitioning. It was so hard and so sad.  I hugged him, held him, pet and kissed him until he was gone. I told him to go ahead and go because I wanted what was best for him.

Manny did not suffer in anyway. And he waited for me to get home from work before he passed 35 minutes later.

Manny brought so much joy and love to our family. It may seem awfully soon to some, but the void left by Manny is so great that we feel we are ready adopt another dog. We have Our eye on a couple of them through the rescue. Manny was my 13th golden retriever and I think I love him the most out of all. Here is a picture of Manny and me on the day we adopted him.