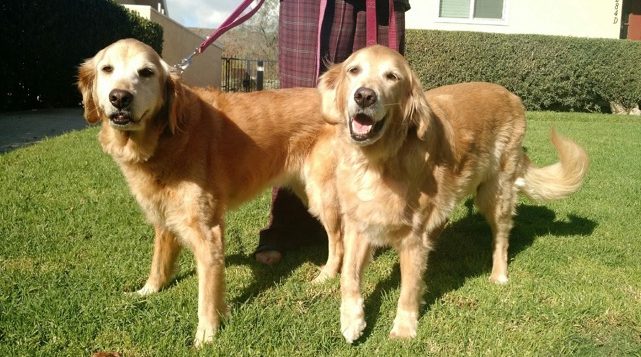 Angel and Sugar came to live with us two years ago at Thanksgiving Time.  We will be forever grateful for their presence in our lives.  About a month ago Angel became lethargic and began refusing to eat.  We thought she was experiencing depression.  She began to lose weight.  We would bring out the best food we could find for her.  She tried but could not bring herself to eat on a regular basis.  She began sleeping almost all of the time and developed a mass in her abdomen.  She was anemic and had trouble getting up and down the stairs in our house.  Dr. Jacks, our wonderful veterinarian, saw her at that point and ordered X-rays.  There was a mass on her spleen.  We took her home to love her for a few days and then returned to have her euthanized.

With Angel gone, Sugar began to decline.  Earlier, X-rays had shown that there was a mass between her heart and her lungs.  She now began having difficulty breathing, and when she moved about,  she would cough. Her heart was beating very fast. She was drinking huge amounts of water and chose to spend time lying in the cold wet grass.  When she was in the house, she would lie on the couch and moan.  We would feed her tiny amounts of food by hand and comfort her as much as we could, but it was clear to us that she was failing.  On her last day she looked at us with sad watering eyes and we knew that it was time to take her in to have her euthanized.

These two beautiful dogs were with us such a short amount of time. We loved them and we know they loved us.

Sugar loved rolling in the grass.  Even on frosty mornings she would roll and roll and roll in the grass until she was dripping wet, and then go back for more. She also liked her kibble with green beans, going for a walk in the neighborhood or for a ride in the car, and being anywhere with her sister Angel.  If Angel was chasing a squirrel, Sugar would run beside her trying to keep up.  If Angel barked at a noise in the street, Sugar would bark too, pretending  to be ferocious.  If Angel was sleeping in the sun, there would be Sugar lying right beside her. When Angel broke her toe and had to be in a cast, Sugar would put her chin on Angel’s back to comfort her.  Sugar was born to be Angel’s shadow.  They were the quintessential bonded pair, because Sugar needed Angel more than life itself.  Sugar followed Angel to heaven after 3 weeks without her.

I am sad, but also anxious to say a few words about our doggie Angel, one who never lived up to her name . . . until now. She was a character, mischievous as they come.  She was part of a bonded pair who came to us as rescues in late 2016.  I knew right away that Angel would be a handful when she stole her first pair of shoes from the upstairs closet.  Later I would find her with gloves, an iPhone, an iPad, and a wallet full of damaged credit cards. She loved barking at squirrels and bringing a baby possum into the house to let it go and chase it.

I never had seen a dog sleep on her back — until Angel.

I never had seen a dog climb a tree to catch a squirrel — until Angel.

I had never seen a dog give endless paws of love — until Angel.

Angel went to heaven on December 21 to join all of the other angels.  They are all laughing together.  I’m sure. We, here at home, are sad.