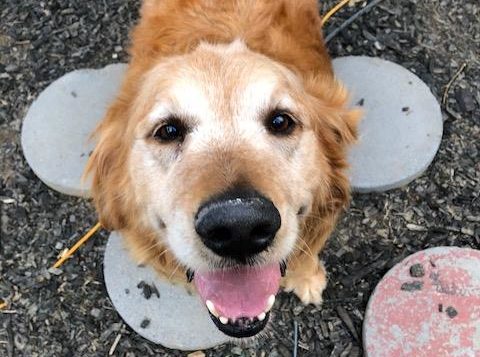 Meet Bobbie, a sweet, lovable senior who came to us from a local shelter when his family decided after 10 years, that they no longer had time for him. It was obvious that he was not used to receiving much attention and would often hide behind something while napping. After the initial few days, he has become very Velcro with his foster family and has not stopped wagging his tail! He is always happy, doesn’t ask for much, and just wants to be with his family and is a great cuddler!

Bobbie came to us with some extra weight and had a little limp, so his foster family has been working to help him shed the excess pounds. He enjoys the fresh fruit and veggies he receives for his treats. He’s doing much better now that he has a lost a few pounds and is receiving glucosamine supplements. Despite his age, he has a good energy level and loves his walks around the neighborhood. He likely hasn’t been exposed to daily walks, so his new family will want to help with his leash manners. While on his walks, he does not bark at or chase cats. He gets along with the resident chickens too. He also enjoys car rides, but needs a little bit of assistance getting in.

Bobbie is house trained and has great house manners, rarely barks and is not destructive at all. He has not counter surfed, but is interested in whatever his foster family is eating. He has not demonstrated any food aggression. He loves hanging out with his canine foster brother and other canine visitors, but could easily be your one and only. He knows simple commands and is eager to please. He enjoys his baths, but has not shown any interest in the pool. He also loves being brushed and groomed.

Bobbie’s a sweet guy who doesn’t ask for much, but would like a family who will be committed to helping him lose his extra weight and someone who can spend a lot of time with him – he has a lot of lost time to make up in that area, after all. If you have completed an adoption application and had a home visit with one of our volunteers and would like to make Bobbie a part of your family, please contact his representative, Sharon at jckc789@gmail.com and let her know a bit about you and the amazing life you will give to sweet Bobbie

At 10 years old, the minimum adoption donation for Bobbie is $350