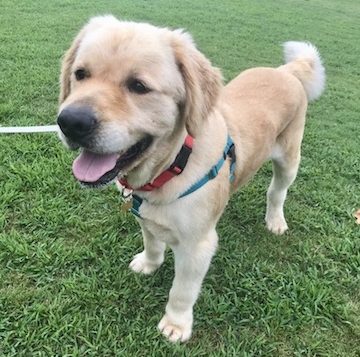 Meet Brutus, a sweet, goofy big boy who has a great disposition and loves, loves, loves water! He has lived most of his adult life outside with a pool for company, and has not had much in the form of training or supervision. His foster is teaching him how to appreciate the indoor life; he’s finding that air conditioning is actually a pretty good thing. Because he was mostly confined to his backyard, everything is new and wonderful and he loves to explore and give everything a good sniff. Apparently at one point he had a canine companion, thus he enjoys being around other dogs and would like to play and run with them if given a chance. He rides very well in the car and cannot wait for his morning trip to the park.
Brutus has a puppy-cut so while he looks (and sometimes acts) like a puppy, he’s actually a big, muscular guy with a huge block head, a very sweet demeanor who delights in giving out kisses. He is mindful of his size and does not jump up to greet you nor is he a counter-surfer. He is gentle when taking treats and has no food guarding issues. In just a few days he has responded well to house training, but will need monitoring for a while as he gets used to being inside.
Did I mention that he loves water? Water is essential and he could swim for hours in the pool. He is even delighted when squirted with the hose and does this special “happy” dance that you must see to appreciate. It’s important for him to have access to a pool, a lake or any body of water where he can swim and expend his energy.
Brutus still has puppy-like qualities and will sometimes mouth your hand/arm when playing but he’s quickly learning that the love he’s trying to give might not be welcome so he’ll instead give you a big slobbery kiss. He’s doing well walking with a harness and is very responsive to corrections. He knows “sit” and we are working on “down”, but some basic training would be fantastic for him and he would enjoy the stimulation as he is eager to please.
Brutus loves to be outside and has no issue with being put in the doggie run when his fosters need to leave him for a few hours. He has not been crated but is restricted to small areas of his fosters’ home during the learning process. He loves to chew so he needs to have access to dog friendly chew items that he can call his own. He is very perceptive in understanding what items are his and what is off limits. Brutus sleeps next to his fosters’ bed and can easily sleep for 9-10 hours with practically zero movement.

Brutus would be okay as an only dog, but would probably prefer a canine companion to run and play with. He’s a gentle giant and would likely be good with kids. We have no idea about felines. If you think you would like to make Brutus a member of your family, please contact his rep at bodie99@cox.net.

At 4 years of age, the minimum donation for Brutus is $500