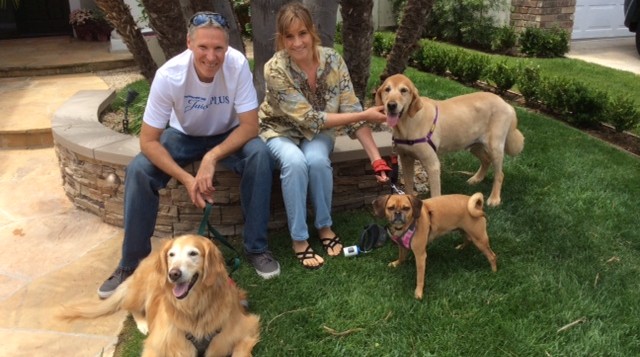 Bryce (real name Charlie) is grateful for everything you have to give him. He is grateful for the food you feed him and the love you give him. He will follow you from room to room just to be by your side. He is perfectly house-trained and has the most excellent of house manners – never touching your things or counter-surfing. He only barks when he hears a strange noise and does not jump on you.

You may have realized by now that Charlie has something different about him. He has just 3 legs – he’s a Tripawd! We are not sure why but it seems his leg was amputated more than 5 years ago but it was not due to disease. Most likely he was hit by a car and the leg could not be fixed. We have x-rayed his other legs and they are just fine. No worries for Charlie – he does not let it get him down at all. He can get up and down on his own, he ALWAYS goes outside to do his business and he LOVES to chase the ball. He does not require long walks – just 10 minutes once or twice a day is fine or some ball chasing in the yard.

Charlie was picked up by animal control when tragedy struck his home. No one in the family stepped up to take him so the rescue picked him up. At first he was unable to get up and had several infections on his tummy, groin and arm but on the third day in his foster home he simply stood up and started running around the house! Charlie has never looked back.

His foster family calls him Charlie Waggles because he is always wagging his tail and is just the happiest guy in the world. He is currently living with 2 other Goldens including a puppy and gets on with them fine. Cats would probably be ok but he has never met one in Foster so we would have to introduce correctly. Kids would be fine too.

We would prefer he go to a single story home but with his vest on he can get up and down steps and stairs with a little assistance. He does not need the vest but he looks so cute in it that we leave it on him most of the time. A pool would be great as this is wonderful zero-gravity exercise for a Tripawd.

Charlie is not a special needs Golden but he is special. As a good friend once said “A home is not a home without a three-legged dog!” You can see a video of Charlie in action by clicking right here!