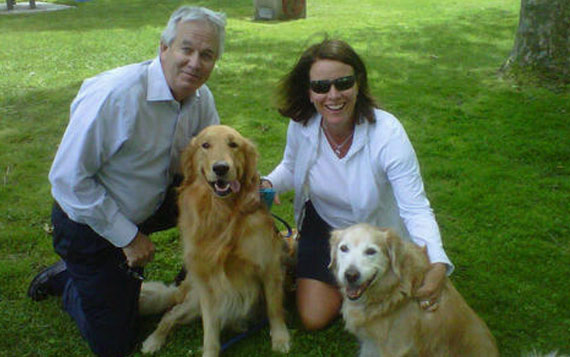 Meet Buffet and his new Family!

On a rainy day, a family was driving on a busy street in Azuza when they saw a big Golden Retriever running scared and confused in traffic lanes. They got him in their car (miraculously, he wasn’t hurt) and brought him home. They would have kept him after doing the required legal due-diligence to find the owner, but their feisty Cocker Spaniel wasn’t having it! So they called our rescue. We met them at the shelter so the owners could find him and kept finder’s rights under SCGRR. The owner did not claim him, and he became ours on the 5th day. The 12 year old son had already named him “Buddy” and was very concerned that I find Buddy a great home, if it couldn’t be his. He and his mom would occasionally contact me to see how things were going. 🙂

Besides being gorgeous, Buffett is about as flawless in the behavior department as we see. One lucky family in Mission Viejo, were chosen to adopt him. He is lucky too, he will always be treated as one of their kids! Buffet is now Buster and will never be lost on the streets again.