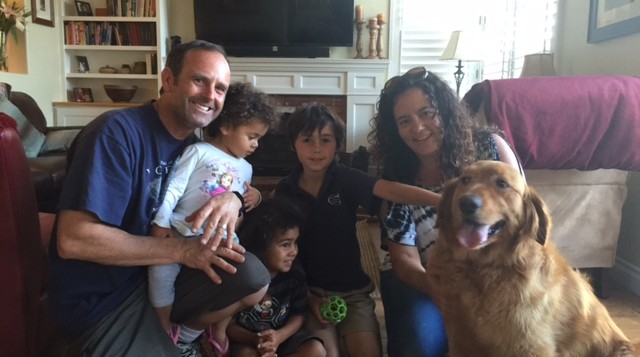 Meet Calvin. Calvin is a big, lovable, sweetheart of a golden, who will be 4 years old in July.

Calvin’s is a sad story. His mom loved him very much, but she had lost her job and home, and could no longer provide for him. He was very sad to leave her, but she did what was best for him.

Although a little subdued, understandably, upon his arrival at his foster home, he is now, after a few weeks, settling in beautifully. He is a big boy, coming in at a whopping 84 pounds (he has lost 2 pounds, about 10 more to go) and a thick, luxurious coat that needs frequent brushing to keep it matt free. And he sure loves those brushing sessions.

He is a very friendly, loving, extremely affectionate boy that wants to be with his people all the time. He craves attention, and though he is not a chewer, he will steal a sock or other human item to get some if he feels you’re not giving enough of it. He loves to be pet, everywhere and often. He walks reasonably well on the leash, and loves his walks and his day trips with his foster fur brother and the family. He want to the beach and absolutely loved the water and playing in the surf!  The car is absolutely no problem for him!

He likes other dogs he meets, big and small, and shows great interest in bunnies and squirrels when he encounters them. Although we do not know how he might be with cats, the feeling is he would probably be fine, being such a gentle, mellow guy( he lived with a 9 lb. dog). He shares toys and plays well with the resident golden. He has no separation anxiety, and he has been left alone at home with no negative consequences. He doesn’t dig, bark, and has reasonably good house manners (he has been known to counter surf on occasion). He does also prefer to sleep in bed with one of his humans-he will grudgingly go to the sofa or his own bed if told, but his preferences are clear.

Calvin will do well in almost any home. He loves kids, and will bask in their love and attention. According to his foster mom: ” Calvin is an absolute love-not a mean or aggressive bone in his body. He will look soulfully into your eyes with love, adoration, and appreciation when you give him affection. He loves to give kisses, to any one who shows him kindness and affection. He’s tried and true golden goodness.”