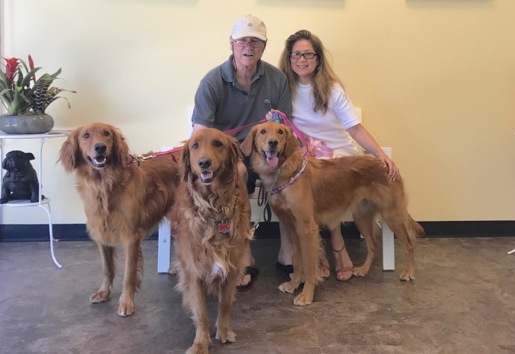 July 21, 2017
The girls were adopted by an amazing family who had just lost their older golden recently.  Their pup Monroe (in the middle), was pining his loss. They are sure to attract a lot of attention when out walking these beauties!
Their Journey: CeCe and KeKe, beautiful litter mates who are extremely bonded to each other, came in to rescue when their family underwent a change in their living situation and were no longer able to care for them. These pups were  actually pound-bound when their owner was told about SCGRR by an acquaintance. Instead of leaving them at the shelter (where they would surely have been split up) they were dropped off with us and guaranteed to be adopted out together. Happy ending for all!