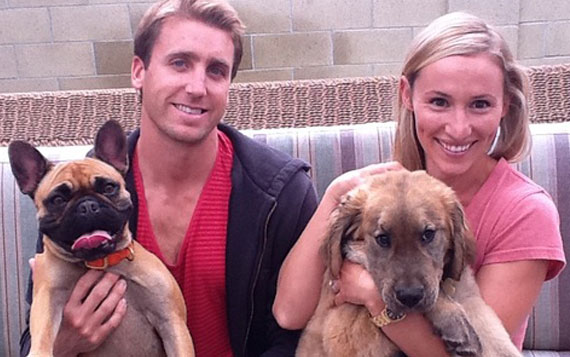 Meet Chesley and his new Family!

When a Golden Retriever mix comes out of the shelter it’s anyone’s best guess on who the parents were. We usually say “father was sneaky neighbors dog”. That was the case with Chesley. We just fell in love with him and knew we’d be able to find a perfect home. See Chesley is on the larger size. When his foster met him her only thought was, Oh my that is a big puppy! But boy was he cute His vet, Dr. Tuz thinks he could be a Golden/Leonberger. Or as a new designer breed, a Golden Burger.

Chesley could grow to 130-150lbs. That dictated what to look in a home. Large yard. His possible heritage meant cooler weather – coast and his exercise needs meant another dog.
Tara and Luke of Dana Point had everything Chesley would need and as it turned out Chesley was everything they were looking for. Luke was hoping for a big dog.. Since his new canine sister is a French Bull Dog it’s nice that they are starting out about the same size. Okay he’s a little bigger. Tara and Luke have promised updates and are keeping a growth chart. A 150lb lap dog.