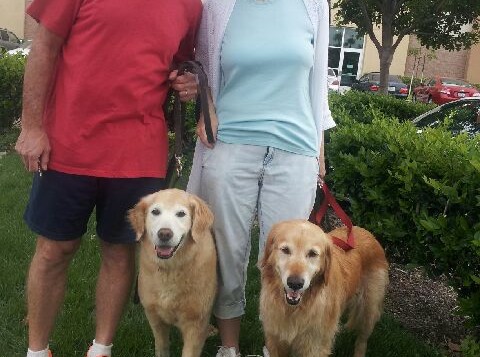 Cora is the sweetest and gentlest Golden Girl! Her beauty is more than skin/fur deep! She is affectionate, always ready for a cuddle, and will follow you around everywhere.

Cora has a quiet, serious demeanor, but will sometimes turn into a little clown rolling around at your feet. Cora is very good with other dogs of all sizes. She isn’t possessive of toys or food. Because she doesn’t like being left alone (and everyone has to go shopping or out to dinner sometime), Cora’s forever home would ideally have another gentle dog for company. Cora becomes less quiet when left without a human around. She can bark in protest. At the vet’s she did not like being crated and she barked a lot. But at home she eventually settles down philosophically, and though she may have some separation anxiety, she does not destroy anything. But, we really would like her to have a forever home where there is human companionship most of the time.

Cora is pretty easy-going so she would probably be okay with gentle children, seven years old and up. We do not know how she would be with cats and other little critters.

Cora is good on the leash and enjoys walks. She is okay in the car, but not right after eating. She is such a fantastic companion to have for another dog and for her humans!