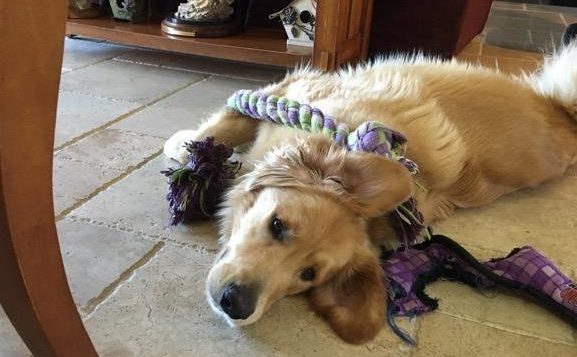 Cormac is what one would refer to as a tabula rasa, definitely a work in progress. Not even a year old, he is a big boy, already 80 pounds, and likely going to get bigger. He is a show stopper for sure-he could easily grace the cover of Golden Retriever Quarterly- but he is all puppy. A high energy Velcro puppy in a very large body, with very little training, hence his landing here in rescue with SCGRR.

Cormac began life somewhere in San Bernardino, born to a back yard breeder. I know this because I inadvertently got the paperwork on the whole litter of puppies, and it appeared there were many. Cormac was purchased at 8 weeks old, and separated from mom and litter mates, about a month too early. Hence, he missed some of the memo on puppy etiquette, and what is and is not frowned upon behavior within the pack.

Cormac is totally full of himself-in his little mind, everything he needed to know he learned in his first 2 months. He knows some very basic commands, but little else. He is house trained, only having had an accident the first day, but none since. He counter surfs like a champ-easy for him as he is so big, but he corrects easily, as he wants to please. He loves all dog toys, and loves long walks. He is wonderful with people-very velcro and loving, and will drop and assume the position for a belly rub in a nanosecond. He loves to be stroked and brushed, and generally just loves to be touched. He is always happy and wanting to play, whatever you want to play-you can chase him, he can chase you, tug of war, ball dropping at your feet-he just wants to be with you, near you, or always have you in his sight, even when he’s out for potty, eating, or doing anything actually.

Cormac can display inappropriate behavior with other dogs-he is big and strong, and he likes to let other dogs know it. As I said, he is full of himself. When being walked, and encountering other dogs, he becomes over excited and wants to make a beeline to meet them, tail usually wagging. Even so, as dog savvy people know, other dogs are not so crazy about this kind of greeting, and they tend to get annoyed. He can also be a little pushy with some dogs, behaving in an intimidating manner where they just don’t want to be around him. I should mention though that he has just recently been neutered, so this macho behavior will likely diminish as his testosterone levels

Cormac is a big beautiful hunk of a dog, very easy on the eyes, who is going to be an amazing dog once he gets some training under his belt. There is nothing wrong with him at all that cannot be fixed with training-he is just like a 10 y/o boy, needing structure and boundaries, an understanding of proper social interaction, and how to make the right choices. Since no one ever showed him how, his new family will have to be the ones. Therefore, we will only adopt him out to a family who is committed to working with him. Cormac needs a strong and savvy doggie parent. At this time, he needs to be the only pet in the home, and due his size and exuberance, he would do best with children over the age of 10 . If you can provide him all these things, and have also completed both your on line application as well as your in home interview, and would like to be considered to adopt this beautiful pup, please contact his rep at bodie99@cox.net