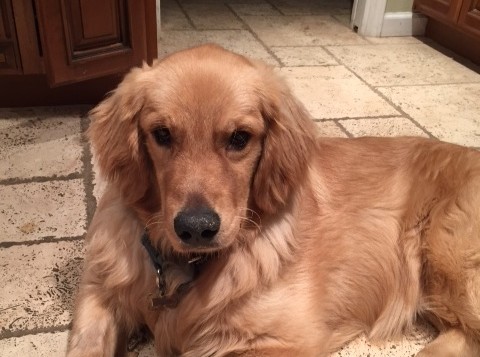 This beautiful big boy is Cubby. He is 8 months old and weighs in at 57 lbs.

He had a rough start in life- his former owners put a puppy collar on him at 8 weeks old and did not bother to take it off for the next four months. It only came off (through no help from them) once it was surgically removed after it had become imbedded in his neck. Nonetheless, he is a total and complete puppy who holds no grudges and still loves everyone he meets.

He doesn’t know his size and will try and get in your lap if you let him. He loves to play with his foster brother- you name it and he’ll play it-tug of war, chase, squeaky toys, rope-pull – anything and
everything.

He is housebroken and knows how to use a doggy door, can walk on a leash (a foreign object to him until recently) but is pretty much a blank slate besides that. Being a puppy who was essentially ignored the first 6 months of his life, he still has much to learn.

Also, being a puppy, he loves to chew. REALLY, REALLY, loves to chew, so someone who is home and able to supervise, and engage him, is a must. He craves attention and wants to be a part of anything going on and will follow his foster mom from room to room. We suspect he loves water as he tries to go through every puddle that he encounters. After a hard day of playing he will settle in nicely with his foster mom and loves to cuddle. He loves to be pet anywhere and everywhere.

He is also very good with children but some caution would be required with really little ones until he can be trained not to jump to hug you.