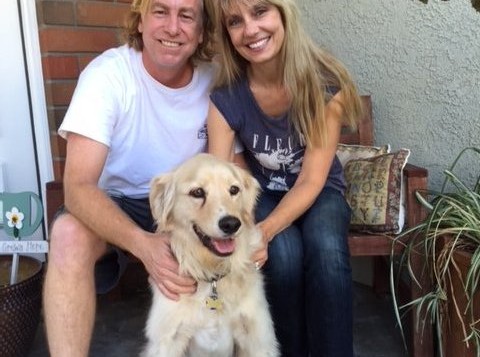 Finnean is a beautiful blonde golden mix who looks and acts much younger than his estimated age of approximately 6.

Finnean was picked up as a stray, skinny and unkempt, fearful and shy. He has come along beautifully in his foster home with an older golden sisterwho keeps him in line. We do not know much about his background, or what he has been subjected to on the streets, but one thing we do know-he does not much like vets or the whole veterinary environment. He has had what could be referred to as a panic attack both times he has been seen by vets, and would really rather prefer to skip the whole thing.

That said, he is a great dog who has had some training-he knows sit, down, and stay (well, sort of) and he is very smart and anxious to please. He is house and leash trained, and loves being pet.

Finny would do well in most home environments-he could be placed as an only dog, or with another even-tempered dog and also with kids. He has met kids on the street near his foster home and does well with them but we feel it may be best to place him with children older than 8.