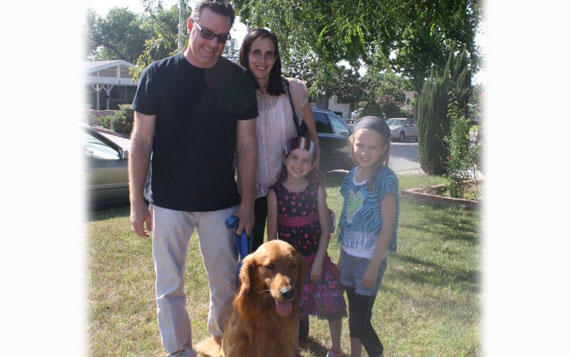 Meet Francis and his new Family!

Francis was a breeder turn in. The breeder called the rescue because she had one puppy lshe just couldn’t sell. He was 17 months old, no shots, no micro-chip, no neuter, no attention or love. He was kept in the front yard that was cement and dirt/mud, day and night. Francis was so lonely that each day when the mail man came to the neighborhood, he would jump the fence, follow the mailman on his route and when finished the mailman would open the gate an let him back in. The owner didn’t shed tears when I took him, the mailman did…When we picked him up he was tethered to a tree and so wound up it took a few minutes to untangle him. Before anyone had a chance to change their mind, we couldn’t get him in the car fast enough.

This last of the litter unwanted Golden Retriever had 41 adopters interested. He is a big red, beautiful boy that is sweet and very affectionate. He needed a home that would give him the love and attention he deserved. Alison and Steve with their two young daughters stood out. They were just the ones to give Francis the kind of life he deserved. Both work from home which means Francis will always have company and someone to love on him and to point him to living a golden life.

The meeting was love at first sight! Steve and Francis hit it off immediately. They say they wanted a dog for the girls, but it was Steve who was looking for a new friend. The girls brought Francis some new tennis balls and won him over. I am sure this is the first day of a new wonderful life, one that Francis deserves.