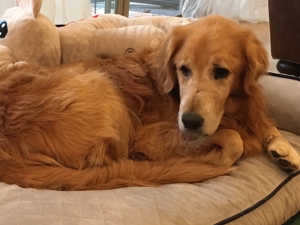 He came into rescue via the East Valley Shelter where he was a stray. He was extremely under-weight and had various skin and eye issues. The vet believes he is about 10 years old, but Gentry definitely shows the youthful exuberance of a younger dog.

Whatever the challenges he faced in his prior life, it has not kept him from enjoying the luxuries of indoor living and accepting the doting love and affection, from humans and animal friends alike.

Gentry has blossomed into a beautiful golden gentleman.  He was once a rag-tag rescue, and anxious dog, continually panting and restless and now is a lovable velcro golden. He is eager to please; he is willing to sit in front of you but more likely to lumber up on the couch for a cuddle – reaping even more snuggles and kisses. Who says you can’t teach an old dogs new tricks.

He is very chill around children and other dogs, loves car rides, and likes being brushed. He walks nicely on a leash, almost prances, and stays side-by-side with his foster brother. Gentry also loves the dog park and dog beach. Gentry is house trained and has been left alone (with his foster brother) in the house for up to eight hours. He knows some basic commands like “sit” and “come” and responds to his name. Gentry does have one bad habit he can be a “runner” and will explore the outdoors if the door is left open.

He’s eager to please and is a quick learner. He has picked up proper house etiquette from his foster brother. He loves his stuff toys, ear, and belly rubs. Gentry will grab items off the coffee table like, spoons, books, napkins, pillows, TV remote and he will barter his goods in exchange for your pets. He is not destructive.

Gentry gets weekly medicated baths to help with his itchy skin and small bumps on his hindquarters which are a result of an overproduction of yeast on his skin. He also gets twice daily eye ointment for lack of tear production. His skin and coat are beginning to recover nicely.

However, he does not do well on the bed at night and may become anxious, restless and pant. Gentry may not be comfortable yet sleeping throughout the night. He wears a Thunder Shirt when he is anxious which calms him down – it’s his security blanket…

Gentry would thrive in a home as an only dog or with another equally calm dog. He is medium to low energy, we do not recommend a home with cats. He has a high prey instinct.