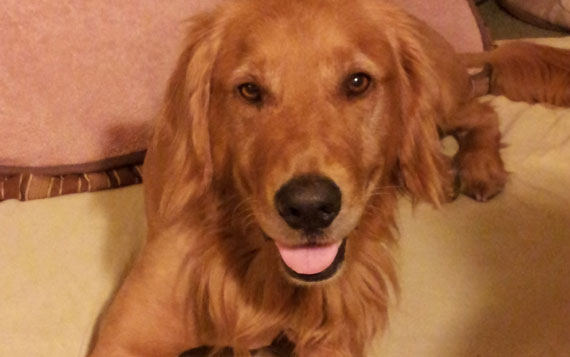 Meet Goldman and his new Family!

Goldman is a very sweet boy that loves to be with his humans. He is affectionate and loving in an adorably subtle way. When you are sitting down, Goldman will come up to you with a toy in his mouth and put his paw on your knee. He just likes to get petted and told what a nice boy he is with his fine toy! He is great in the car and on walks.

Goldman is house-trained and he has impeccable house manners. He is mostly calm and docile, except for when the mailman comes to the door. We didn’t think he barked at all until then. Goldman does not like to be left outside and will whine at the screen door. Goldman gets along great with other dogs unless they were to be possessive of tennis balls and fluffy toys (which he is not). An alpha male and he would not be a great match.

Goldman is doing great with his two female foster siblings. We believe he has shown an interest in chasing cats. Gentle kids over 10 would be okay. Goldman’s coat was in such bad shape when he was brought to the shelter, that our vet’s groomers had to give him a shave. He will be fluffy and “Golden” again when his fur grows back. Goldman is a very special dog and would love a home where he will have a lot of companionship, both canine and human.