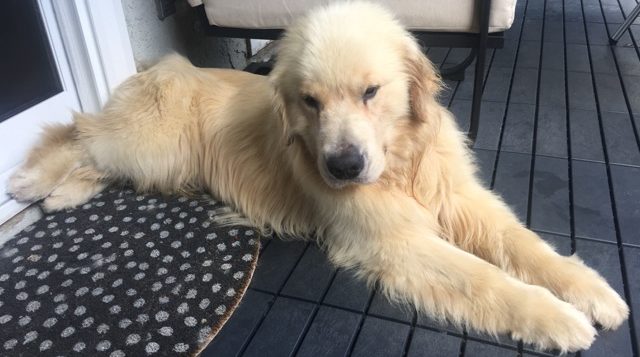 Grizzy was rescued from a meat farm in South Korea and brought to the U.S. in partnership with KDS Passion for Compassion. He is a big (although still underweight) and long feathered Golden. His friends at SCGRR call him the gentle giant. All love, hugs and deep gazes with his people. An old soul. Good with humans of all sizes. He would be fine with kids of all ages – knowing he is a physical boy and could knock small ones over accidentally and needs work on jumping up. He equally likes to follow you around the house but also nap on his own, checking in from time to time. He loves to be brushed and accepts baths very calmly.

Although he loves to play with other dogs and is fairly good with them, he would do best as an only dog with careful socialization to help him learn appropriate doggy behaviors. He might also be ok with a dominant female. He tries to dominate and gets overstimulated with play and can be a bit of a bully. Regardless meets other dogs well on leash and is very sweet and gentle. He would be best to avoid cats as he seems overly interested.

Grizzy adores toys and is still learning the difference between HIS toys and other interesting objects in the house. He loves to carry them around and show them off but rarely destroys (except paper things he loves to shred paper). He runs hot and likes to sleep on cool surfaces such as the concrete patio. He’s shown little interest in the pool so far. He counter surfs. He will jump up gently and put his paws on your chest for a huge hug. He is doing well on house breaking but does have accidents occasionally so he will do best with access during the day to a yard and someone willing to work with him. He also knows how to use the doggy door. He seems to accept the crate as well which could help with housebreaking.

One of the residual behaviors from a life in a cage is some pacing and circling –, especially in new environments. After a bit Grizzy settles in. The circling can re-appear during leash walks as well but he improves every day. He does pull on the leash and is a strong boy but has done well with a gentle leader. He rides well in the car but needs a lot of encouragement getting in and out – sometimes a bit of help. Throwing his favorite ball it seems to help him feel it’s ok! He does very well at outdoor dining – looking pleading for a bit then lays down for a nap. And one of the most endearing traits he likes to lay and HUG his bowls – food and water.