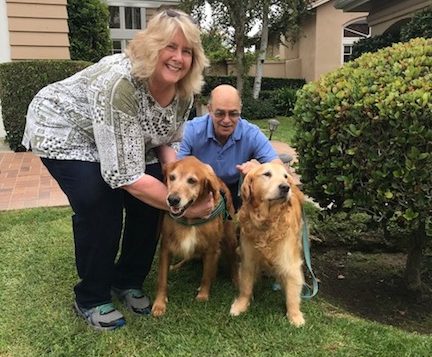 This is Guiness. Another beautiful, thankful golden rescued by SCGRR. Found on the streets, he was sent to a local shelter where his owners never bothered to come and pick him up. His foster mom can’t understand this because he is such a sweet, loving great golden! His life probably has not been the best. Listed as 7 by the shelter-if so, they have either been a very hard 7 years, but he is likely older than that. He was skinny, his ears were infected and he had a pronounced limp (vet said it’s early arthritis). He also did not seem to understand any commands (English).

Guiness is a real cutie with curly hair on his bum and wavy hair on most of the rest of his body. And his gentle personality and demeanor outshine his handsomeness. He is feeling better and stronger every day since he was rescued. He is on a healthy diet no grain/high protein food and bone broth. Meds have cleared up the ear infection. He started with pain meds for the arthritis limp but we are weaning off of those as his muscles grow stronger and he gets some decent exercise. He goes on slow walks twice daily with his two foster sisters that he loves being around. He is taking most of his cues from them and has shown no aggression (none). He is getting a little peppier on his walks with no limping anymore but still slow.

Guiness (he does not respond to that name) is having a lot of firsts. He is learning basic commands like sit and stay – can be coaxed to do so with treats right now. He is learning to softly take food from your hand. He has climbed steps which at first he was very wary. He is still learning to use the doggy door. He has also realized he likes to swim – having had a couple of water therapy sessions with his older foster sisters.

He is a total cuddle bug and loves, loves, loves being touched and petted. He will want to sit next to you on the couch with as much of his body on your lap as you can handle. He is quiet around the house though a total Velcro dog, always seeking to be at your side throughout the day.

Guiness will need a continued healthy diet and a semi-active life style with regular walks to curb his arthritis and gain some of his youth back that he deserves! It would be great if he had access to a pool or water where he can swim. He is on the timid side though would do well with another none threatening older dog who can be his role model. He likes to be stimulated with new adventures or games like hide-a-seek. He hasn’t yet demonstrated any desire for toys or balls. Ideally, Guiness will do best with someone who is seeking a gentle companion where he could be home with you most of the day, and he can go out with you when possible. He has responded differently to some males (hides from some) but most of the time he is a greeter. He like car rides. He prefers sleeping next to you – close, he doesn’t understand personal space. He has been very loving around children who are gentle with him, though with some caution until he remembers better not to bite down when given treats – he is learning but sometimes he forgets. He has not been around cats but pretty sure he would be gentle them with also.

Guiness is a wonderful, gentle soul that will show his unwavering love and appreciation to a caring family that opens their home and hearts to him. If you feel you may be that family, please contact his rep at bodie99@cox.net and tell her what kind of life this sweet boy could have with you. Please note that you must have completed the application process, which includes both the online application, as well as the in home interview.

At around 7-8 years old, the minimum adoption fee for Guiness is $400