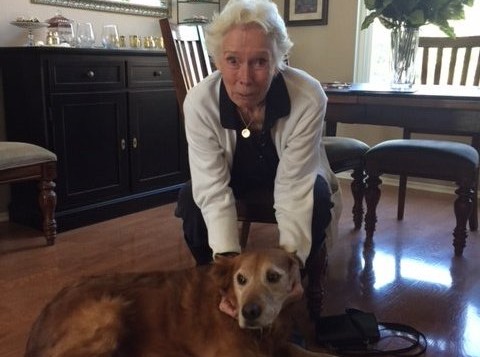 This handsome guy is Guthrey. Guthrey has that dignified, wise beyond his years look about him with the sweetest frosty face ever.

We don’t know much about him-he was languishing in a shelter when one of our volunteers spotted him, and we knew this was no place for him and we had to get him out.

He is a real gentleman-he is house trained, leash trained and knows his basic commands like sit, shake and down. He is very friendly and loving and is good with other dogs. He can be left alone home with no negative consequences and has no separation anxiety.He doesn’t bark much, dig, or jump. He doesn’t chew anything not belonging to him, and will happily share his toys.

He meets and greets new people and surroundings very well, including kids and loves to be pet and brushed. He loves his rubber ball and when the mood strikes him he will fetch a stick for you, but his favorite activity is moving from his dog bed to the couch, on to the floor and back onto the couch again.

At his current foster home he is living with his foster fur brother english bulldog, and a lab/pitty mix and gets along well with both although he does like to try and snitch some of the slower eating bulldog’s food when given the opportunity (something Leo does not take to kindly to)..\ No matter to Guthrey-it’s like water off a ducks’ back-he’ll just move on to some other activity like settling on to the patio and chilling and barking at the occasional bird. How such a sweetie wound up at a shelter is beyond us-he is as close to a perfect  mellow gent as can be.