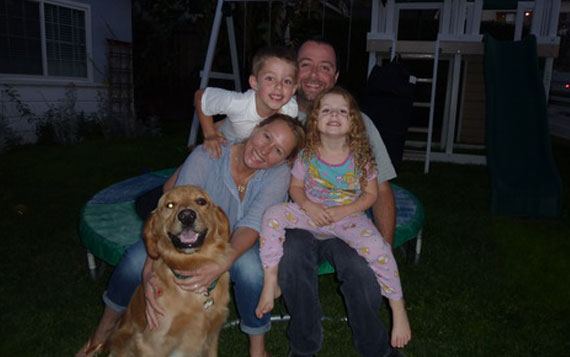 Meet Herman and his new Family!

Meet Herman, a friendly, playful, affectionate 18 month old boy. Herman was rescued by a Good Samaritan who found him running the streets of the West San Fernando Valley with severe trauma to his left eye, most likely inflicted by a human. SCGRR took it from there and began sending him to medical treatment to hopefully save his vision and help him realize that people are still good. Unfortunately, the vets were unable to save Herman’s vision in his left eye, but did not need to actually remove it. Herman loves people (on his walks, he goes up to everyone in his path, sits, and waits to be petted) children, and other dogs (he is submissive to even the tiniest teacup yorkie). We are not sure about cats. He is a cuddlier who loves to snuggle up to his people for affection (even if this means a very early wake up call sometimes) and considers himself a lap dog, despite being 65 lbs! Herman is still a puppy and needs some training in order to work on some of his house manners (he has shown some fondness for shoes and stuffed animals that do not belong to him!).

He does have some separation anxiety and would do best with a family where someone is home most of the time. Herman would love to live with a family who has a doggie brother or sister for him to play and exercise with, and this may help with his separation anxiety. He enjoys the beach but is not really a water dog. Whoever adopts this lovebug will need to commit to taking him for medical checkups on a regular basis (at least once every 6 months) to check on the health of his traumatized eye.