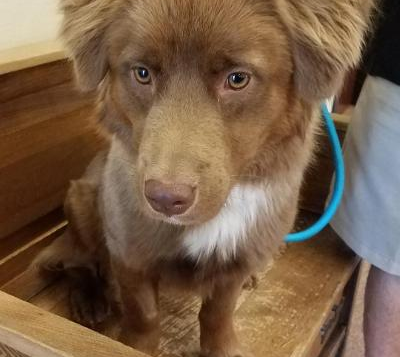 Today was Hershey’s lucky day! He was adopted by George & Margarita. They have a 2nd home in Lake Arrowhead so Hershey will have a blast in his new home with a big pool and a home in the mountains.
Since Hershey is a Nova Scotia Duck Tolling Retriever (water dog) we thought he should he should have a pool or lake to swim in. Jackpot…he has both! He also didn’t seem to love the extreme heat here in the desert…had a spot under a tree he always ran to.
Hershey was a stray who was found wondering the streets in Cathedral City and went to a shelter nearby until we rescued him about 4 weeks ago. No chip, no collar (no fix!) and his body was shaved, so his head, chest & tail were the only fluffy parts of him. He will have a beautiful, soft chocolate coat & he has the cutest “white soul patch” on his chin & chest! Our Vet said he is between 1-2 years old, but probably closer to 1 since he’s so spunky & has the whitest teeth!
Hershey was great with his foster brother but definitely wanted most of the attention. He’s such a happy, affectionate, active puppy. Thank you to his foster dad, Shane, for taking such good care of him. It was hard to say goodbye to this lovebug today. 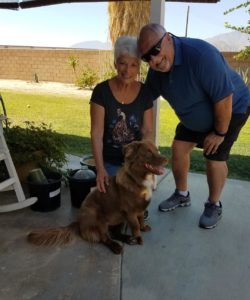