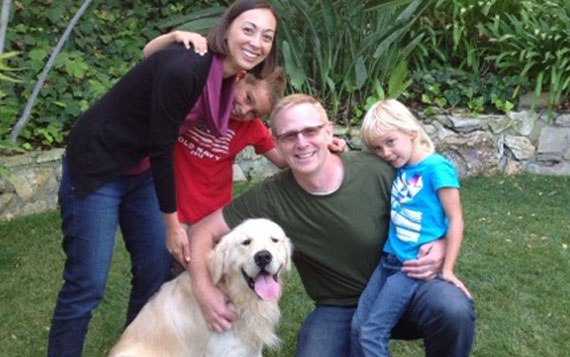 Meet Jäger and his new Family!

This beautiful guy’s name is Jäger. One look and you’ll fall in love. He is about two years old and came to us because his family could no longer care for him. He is cream colored and has the most wonderful cuddly and BIG head and paws. His eyes are almost black and they sparkle when he looks at you. His foster mom says he’s got a head like a baby polar bear and eyes like a baby seal. At 75 pounds he is a very gentle and extremely good natured. He loves the water, playing fetch, long walks, and riding in the car. He also has a goofy side, loves being brushed and hugging his people. He is completely housebroken, but watch your slippers – he likes to carry them around in his mouth. He’s good on the leash but could use a little more training. He comes when he’s called and obeys commands to sit, stay, down & get your toy. When Jäger came to us, he had a couple of hot spots from fleas on his back side but with treatment, the fur is growing in nicely. He also had an infected paw which has been treated but will still require some TLC. Jäger loves everybody but can be a bit shy at first. He’s great with kids, other dogs of all sizes, and doesn’t seem to mind cats or even squirrels. In sum, Jäger is a lovable sweet pup who just wants to be part of a family who will give him lots of love and affection. You will get that and much more in return from him.