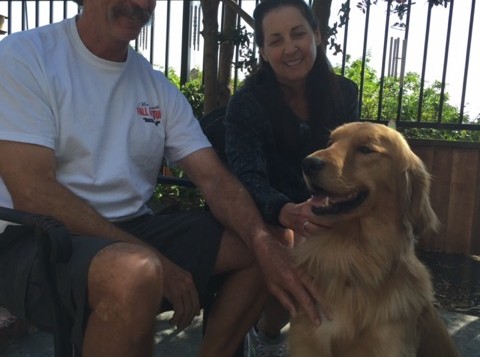 Meet Java. This sweet boy was given up by his owner after he figured out he didn’t really like dogs all that much and had neither the time nor the inclination to care for him. So he came to us.

Java is just one giant puppy with some filling out to do to catch up to his paws. He was quite underweight when he came to us, but with some good nutrition, he has already put on a couple of pounds with a few more to go.

It is unlikely Java had much interaction with others prior to coming into rescue, and he is a shy , cautious dog when first meeting new people. Once he has deemed you are okay, he just wants to get into your lap for some loving. But, he is the one who determines the pace.

Java is house trained and very smart, learning the doggy door in just a few minutes. He knows sit and will sit and stay until you tell him it’s okay to eat. He is neither food nor toy possessive. He is crate trained, doesn’t bark very much and doesn’t dig, although he could use continued work on his leash manners.

He enjoys meeting other dogs and loves stalking squirrels, so unsure about cats as he has not met any yet.

Java loves his walks, likes to play tug of war and loves car rides. His favorite toys are anything he can fit into his mouth and carry around. He loves to be loved on and demands constant attention and contact.

Java would do equally well as either an only dog or with another easy going companion and he loves kids, but due his size and strength and playful nature, small toddlers may not be suitable for him.