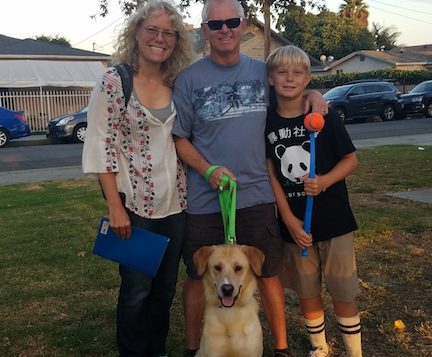 Meet 2-year-old Josh! This handsome boy, believed to be a retriever mix, came in with Jaime, a very recent SCGRRescue alumni. They were together in a meat farm in S. Korea and were saved just a couple of days before the BokNal Festival – which is where people buy dogs to make into their traditional stew (they think it fortifies the blood and helps them get through the hot summer months). Josh and Jaime were also used for breeding together.

He has been with his foster for the past month after being successfully treated for heartworm, which he was diagnosed with in S. Korea. He is now an extremely healthy and happy boy!

Josh is so sweet and smart! He is very affectionate but not a Velcro dog. He is high energy and loves to play. His foster has taken him to a dog park and he did great, with no aggression or fearfulness. Sometimes, when he enters a new situation, he will stand in front of you with his arms around you like a hug; if he isn’t jumping into your lap like a lap-dog!

He whines when his foster leaves if she leaves him in the crate, but only for a little bit and then he settles down. She can leave for short periods without crating him and he does fine in the home free.

She is working on his leash manners and he does respond well to corrections. He is housetrained, loves everybody but is sometimes shy with men. He shows no interest in cats. He has met a few children including a baby and did fine.

He likes toys and balls but tends to shred them. He does not counter surf or get into the garbage and rides great in the car. He loves his kibble and pretty much eats whatever you feed him. He is very gentle when he takes treats from your hand.

We feel Josh would do best in an active home and one that will keep him busy. A home with a non-alpha dog would be best (if a dog is in the home) and possibly no young children, since he is very young and active. He enjoys human companionship, so one with someone home for much of the day would be important to him so he doesn’t need crating.

If you feel your home would be perfect for this handsome boy, have completed an application with our rescue and have had your interview, please write to homeforjosh@gmail.com and let his rep know how he would fit in your world.

Being Josh is a mix from an international country, his adoption fee is $800.