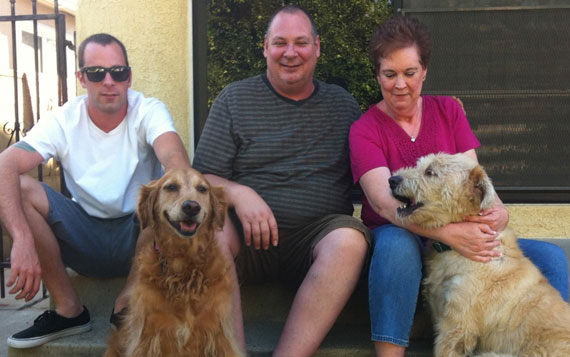 Meet Julian and his new Family!

This extra sweet boy is Julian. Julian has been through a great deal, but he is on the mend and looking for his forever home! We have reason to believe Julian is a golden doodle (at least in very large part). Due to a severe allergic breakout leading to a nasty yeast infection, his fur was shaved. He is getting fuzzier by the day and we do spot some curls near his paws. Julian was pulled from the shelter at the 11th hour and has been nursed back to health by several SCGRR volunteers. He is a very happy-go-lucky boy these days. He loves people and other dogs. He will chase cats- so his new home will not include these for their own safety. Julian is extremely affectionate- he enjoys giving kisses, laying with you and ON you. In addition to attention from humans, his other favorite thing on earth is a good walk. He is quite good on his leash (pulls a little to start but settles right in).

Although he adores the goldens at his foster home- he is a bit jealous of the relationship shared my his foster mom and his golden foster brother. For this reason, Julian is looking for a home where he will have playful canine sisters, or, as long as he gets out to greet other dogs, he could be your one and only.