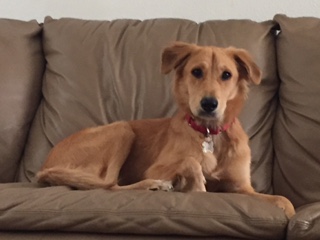 Lala (aka Madi) and her brother Kiki came to us from Taiwan where they were found alongside their golden retriever mom who had died after being poisoned. They stayed with the Taiwan rescue for several months until they were calmer and healthy enough to make the long flight to Los Angeles, where SCGRR could help them find a kind, patient, experienced and loving family. Lala was initially adopted, but had to be returned to rescue when her new family’s living situation changed.