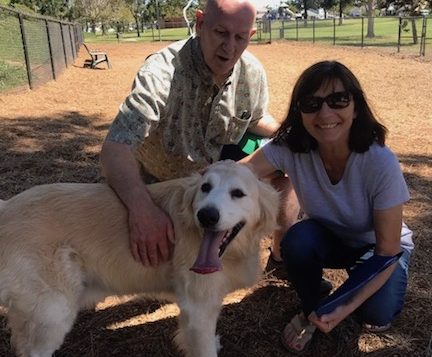 Meet Malek, a very sweet, happy, mellow boy who finds himself looking for a new home. While he has been in foster, he has been a mostly excellent houseguest at his new home-he is potty trained, knows what is his and what is not, and causes no destruction of any kind when left home alone. He also knows his basic commands, walks reasonably well on a leash, and is familiar with a crate. That said, he is not above a little counter surfing to check out anything interesting that might be up there, or nosing around the trash, grabbing a kitchen towel or two-hey, no one is perfect! He has displayed no separation anxiety of any kind when left alone at home, other than the first 24-48 hours in his new home, after which he quickly settled in . Malek also loves car rides, particularly when the destination is the dog beach-he loves the water!  He also enjoys visiting doggie daycare when he can.

While Malek is your typical velcro golden, usually nearby for nudges and pets from anyone willing to give them, leaning in to you whilst trying to get on your lap to cuddle, wanting to be always touching you if at all possible. That said, he is also content to find a comfortable spot on his own for a little quiet time, tho not too far away. He is mostly mild mannered, with medium to high energy-he enjoys a few long walks a day, and absolutely loves, loves, loves his tennis balls and playing fetch.

Malek did live with two other dogs, one a dominant female mix he was quite submissive to, and the other a senior blind pug. He has been known on occasion to do a little resource guarding of his beloved balls and/or treats-certainly not anything unmanageable, and he is generally very good with other dogs, both at doggie beach and daycare. He is pretty well adjusted, and quite social, very sweet and mellow, and reacts positively to a stable and predictable routine. He is loveable and loving, and he absolutely thrives with attention of any kind-he is very motivated by it, which will facilitate his continued training. Speaking of training, Malek has been professionally trained by Bark Busters, which comes with a lifetime guarantee of assistance/advice nationwide for any dog trained by them, which comes with him.

We would like Malek to have a yard in his new home, where he could chase down and retrieve his tennis balls in. He would be okay as an only dog, or likely equally well with a more dominant female, already having lived well with one. He loves to swim, so a pool or access to one, or the dog beach, would be a bonus. He craves and needs attention, so a home where he will be showered with lots of it would be ideal. He has not lived with children, other than a baby in the last few months, and he does not react comfortably to them-for that reason, as well as the occasional toy/treat guarding, we will only adopt him out to an adult home, or a home with children over the age of 12.

If you feel you have the kind of home that would make Malek a happy boy, please contact his rep at bodie99@cox.net. Prior to contact, please ensure that your on line application has been submitted, and your in home interview completed, otherwise we will be unable to consider you.