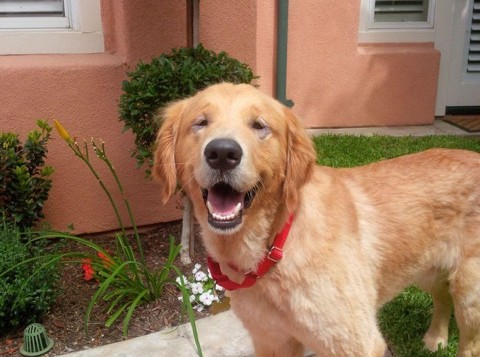 This big, beautiful guy is Markall, or Marky Mark, as we call him.

Marcelo has just had recent entropion surgery on his eyelids, a condition where the eyelids curl inwards and the lashes rub against, and irritate, the eye, and they are healing up nicely. Don’t mind the funky do on him, either-he had a couple of matts and knots when we got him, and the groomer was told to take off just what was necessary, and, well.. suffice it to say, we will not be using that groomer again. Luckily, it’s only hair, and it will grow back, but who cares-he still looks beautiful! Even with the Mohawk!

Marky is a big-boned boy-his foster dad has put a much needed few pounds on him, and at 73, he should probably gain another five pounds or so. He has decent house manners, and can be left alone at home without being destructive. He has had very little training, it appears, but is starting to catch on ( sit, stay, and, what he hears very often, the word no) therefore formal training would be very beneficial for this guy.

Marky is very playful, and enjoys meeting and playing with other dogs. He is extremely friendly with all he meets, and loves car rides, especially when his foster dad takes him to the office with him, where he is very well-liked. He is not a big barker, doesn’t dig, and doesn’t chew anything other than his own stuff. He loves playing with his balls and his rope toys, and really enjoys his walks. We don’t know about him and cats-he is pretty interested in squirrels and bunnies, though.

One thing we are positive about, and you can see in his pictures below, is he *loves* watching basketball!