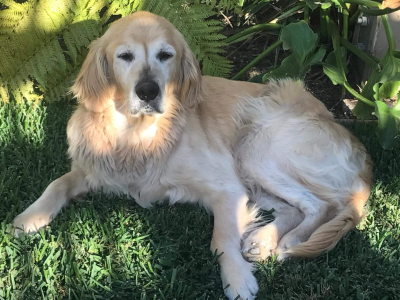 Marlo was turned in to the North Central shelter. Was filthy, his coat was coarse, his front teeth are completely worn and he was too thin. His coat is now soft with casual waves and the Ombre color of his fur would cost a fortune to replicate at a hair salon. He still needs to put on some weight. He has an adorable Mohawk across his snout that goes up between his eyes. It forms the shape of a Y hence his foster mom calls him “Wyatt”.

He is a love – so sweet and mellow and loves to meet kids. Marlo is gentle and playful with stuffed toys but does like to de-squeaker and un-stuff them…..oh well. Good thing we have lots of cheap ones! He did not love his first time in the pool when he was taught how to get out – but that could change. He is housebroken. Marlo’s bedtime is 10:00 pm – he will let you know it’s time by signaling that he needs to go outside to relieve himself. He also likes to sleep late, he looks at you getting up as if to say, you go to work I’ll stay right here (on the human bed).

Marlo is working on leash-pulling; however, he wants to please and is easily corrected. He is learning basic commands such as sit and down. He loves to go for walks. It’s pretty clear that he’s spent his life outside in a yard, but has not lost that zest for meeting new people and going new places. He is excellent in the car and even lets his foster mom sing along with the radio without a complaint.

Was curious about a cat he encountered on a walk – however, didn’t linger and continued walking. A loose dog came up to him and he left it alone, continuing on with his walk. He may be a counter surfer – too early to tell, but one day he did bring his foster mom the SOS pad that was in the sink area. I suppose he thought that was fun…but not too tasty.