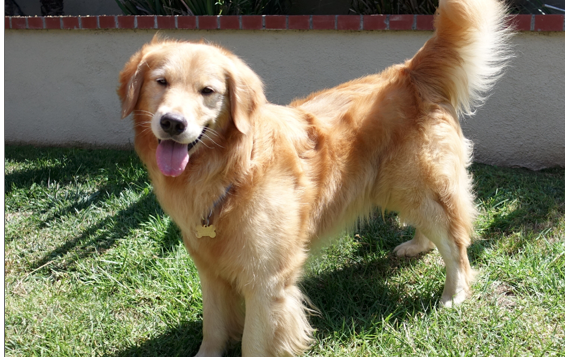 Meet Mighty, a male Golden from Korea who we figure to be about 3.

He is a high spirited, high energy Golden who loves to play and never says no to a treat. His personality is goofy, playful and very loving. He enjoys playing with his toys and wrestling with his sister. He loves attention and will sit for hours (if you have the stamina) for grooming and brushing. His coat is thick and requires daily attention but he’s worth it! He plays well with his sister and doesn’t appear to be protective of his food, toys or his humans. He has met other dogs on his walks and doesn’t appear at all aggressive.

Being new to this country and everything in it, Mighty will bark at different sounds that he hears, and given that we think he likes to talk, he will continue until you tell him otherwise. However, he understands no and will cease after a few corrections. Another thing– he loves anything plastic and paper – he’s gone through a few toilet paper rolls. He is easily redirected with a chew toy or a ball. He can be curious bordering on the mischievous, but that’s just the puppy in him and he is easily redirected. Also, he loves to give big hugs which makes it difficult to get mad at him (and he knows it!).

Mighty is very strong and excitable and likes to jump and wrestle with his humans so perhaps a house with older children would be best. Mighty would love a nice yard to run around in as he is very fast and loves to run around at top speed. He needed a little encouragement but found out that he likes the pool in small doses. But once he gets settled, Mighty will hang out at your feet for hours, but is always ready to play.

Mighty is house trained but had a couple of accidents initially- I think this was just to mark his territory. He has jumped on the kitchen counter a few times – he seems to just want to know what’s going on up there. He prefers to be outdoors but sleeps inside in the evening. Although he has a bed, he prefers the cool tile floor as he tends to run hot. He does not need to be crated. He will stay asleep as long as you are asleep. If you get up at night, he’ll wander over to say hello but goes right back to sleep once you’re in bed. He, along with his sister, likes his morning walk very first thing and again in the evening before retiring inside the house. He walks well on a leash but if you run with him, he will go full throttle and tends to pull. Mighty is a very fit dog so I would definitely recommend daily exercise and play. He doesn’t appear to have separation anxiety. In fact, he will just lay down and sleep until you return home. Not sure about cats but he will chase the lizards in the yard and has been curious when he sees bunnies on our walks.

Mighty is special because he is one of those dogs who can be soft and loving but also very athletic and playful. He always has a smile on his face and he learns very quickly. He’s just a big old puddle when it comes to petting and immediately falls under your spell.

If you think you could give Mighty a great home here in SoCal, have completed the application process (both application and in home interview) please contact his rep at keoni1957@yahoo.com

Due the increased costs associated with bringing these dogs to the U.S., both travel and veterinary, the donation for Mighty is $1500.